We’re all aware that certain sightless species have, over time, evolved to develop a way to “see.” We’re also all aware that certain species use body parts that we normally associate with one sense for a completely different sense; for instance, snakes using their tongues to smell. In a single cave in Ecuador, researchers have found a species of blind cavefish that has evolved to navigate with its teeth, which happen to be protruding from its skin. Researchers at the University of Maryland, the Pontificia Universidad Católica del Ecuador, and the National Institutes of Health have noted that this trait could be a previously unknown evolutionary phenomenon.

The researchers say that this trait of this particular species of blind cavefish may not be found anywhere else outside of this single cave in Ecuador: 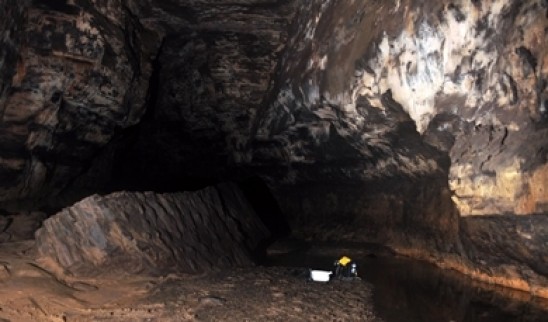 The fish that lives in this cave, Astroblepus pholeter, is a catfish that uses its skin teeth, so to speak, as a sensing device, whereas other fish that have the skin teeth — officially called denticles — normally only use them for protection or to swim faster. Daphne Soares, University of Maryland assistant professor, and her team have found that the catfish’s denticles are able to project hydrodynamic images that allow them to feel their way around without eyesight. Soares noted that with the discovery of this cavefish, came the discovery of a “whole new sensory organ to examine” when they find new species.

Normally, fish sense the flow of water with neuromasts, small organs that have similar characteristics to an ear. Due to the type of environment a cavefish lives in, cavefish often have enlarged neuromasts. Astroblepus pholeter, however, doesn’t have neuromasts at all, but their denticles connect a sensory section of their brain, which allows them to determine flow of water and the distance between things without having both sight and neuromasts. The researchers found that the fish without their denticles couldn’t orient themselves at all.

Soares feels that the strong current in within the Ecuadorian cave could be why Astroblepus pholeter developed its denticles, as the flow of water could be too strong for even expanded neuormasts to deal with.

As a parting gift, check out what the denticles look like up close: 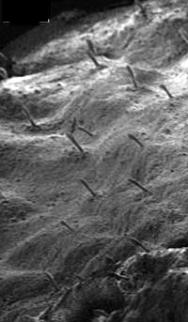 The study was recently published in the journal Current Biology.