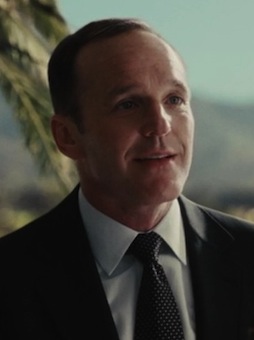 I enjoyed what they did with Coulson in The Avengers; his story was an important part of that movie… When Joss Whedon explained that the question of what Coulson is doing alive has far reaching implications for the series and that there’s a mystery involved, I signed up immediately. – Clark Gregg to Metro.

Ever since the pushing three hour moment in which I saw The Avengers, it seemed to me that the movie was leaving Marvel Entertainment a backdoor to bring Agent Coulson back whenever they wanted to (most easily expressed with the phrase “Rule #1: Director Fury Always Lies”). The fact that the creators of Agents of SHIELD have not only refrained from taking the easy way out but also committed to making the explanation of Coulson’s return have a major effect on the series’ setting and story. Well, that’s the kind of gravitas that reversing a fictional death should be treated with, if it must be reversed. I’m looking at you, comic books.

The whole Metro interview with Gregg is full of nice little nuggets, for example: who would he really like to see in Agents of SHIELD? Oh, just his favorite childhood superhero, Iron Fist.