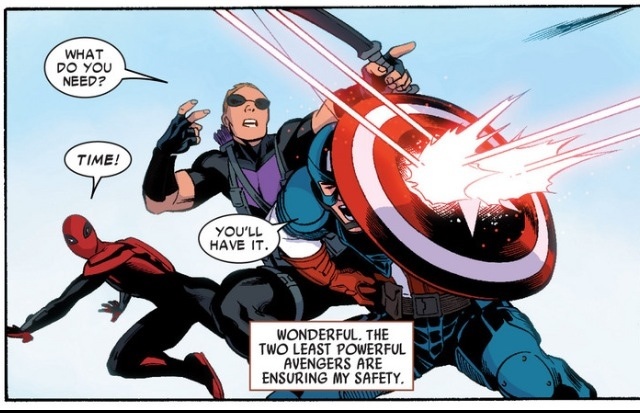 Rumors that Hawkeye would be taking Captain America’s side in Civil War have brewed for a while, and today, Jeremy Renner confirmed them. What does he have to say about this important choice in Hawkeye’s life? “I don’t know. They wrote me in that side. It made sense to me.” Wow. Eloquent as always, Mr. Renner!

As for the rest of the Avengers’ allegiances, speculation has it that Black Widow will bizarrely side with Tony, the Falcon will be Steve’s ally, Black Panther will be the Switzerland of the group, and Spidey could be a side-switcher. Speaking of Peter Parker, his Aunt May may or may not nab a brief appearance in Civil War. Marisa Tomei is still slated to play the role of Spidey’s aunt, be it in future Spider-Man flicks or Civil War or all of the above.

Personally, I can’t figure out how they’ll manage to spare a shot or two for Marisa Tomei given how many other characters have already signed on for this super-powered parade. But what do you think about all these Civil War hints?

(via The Daily Dot, image via Imgur)