You Got Chocolate In My Peanut Butter! And Both of Them In My Oil Spill! 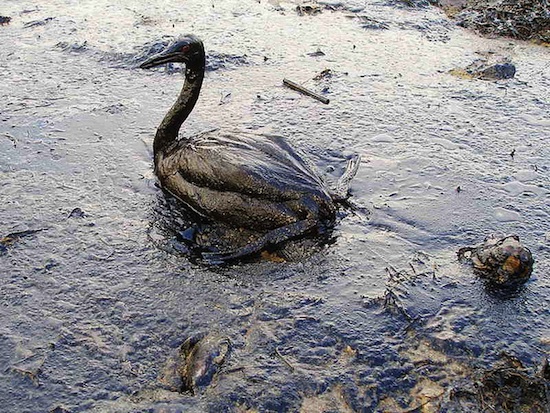 Fact: There is no situation in life so bleak that it can’t be improved, if not entirely solved, by a liberal application of candy. For proof of this statement, look no further than a recently developed chemical that promises to use the ingredients in peanut butter and chocolate to clean up oil spills, like the one that resulted from the Deepwater Horizon disaster. Because like the Planeteers, when chocolate and peanut butter combine their powers, there is pretty much nothing they can’t do — including save the environment.

Developed by researchers at the University of Southern Mississippi, the new dispersant has the potential to do more than just break apart the oil slicks that can result from spills. Presenting their findings at the National Meeting & Exposition of the American Chemical Society, team member Lisa Kemp also bragged about the dispersant’s ability to prevent oil from sticking to birds and other wildlife.

“It not only breaks up oil but prevents the deposition of oil on birds and other objects, like the ingredients in laundry detergent keep grease from redepositing on clothing in the rinse cycle. Birds can sit in slicks of the dispersed oil, they can dive through it and take off and flap their wings, and the oil will fall off.”

Using food chemicals to create a dispersant for oil spills doesn’t just make for a quirky ingredients list, though. Since these chemicals are already used in food production, there’s little question about their safety. They’re also widely available, meaning big batches of the dispersant can be whipped up on the fly without breaking the bank. Considering how much dispersant is needed to break up an oil spill — BP employed an estimated 1.8 million gallons of dispersants in their attempts to clean up the Gulf of Mexico 2 years ago, according to The Times-Picayune — being able to order in bulk on short notice is an important practical quality.

While promising, the substance is still a protoype, and testing on it hasn’t left the laboratory yet. To get to the next level, it will need partners willing to give it a real world field test and get a look at how it performs during an actual oil spill. As cool as this stuff is, here’s hoping they don’t get that opportunity any time soon.