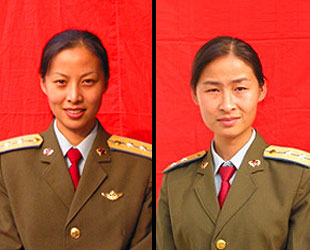 To be serious about China for a bit, the country has been playing close to the vest with information about its space program and its taikonauts (and isn’t that a great word for astronaut?). So frankly the last thing we’d expect is for the identity of the first Chinese woman to make it above the atmosphere to have been revealed by curious stamp collectors!

Above you can see Wang Yaping (left) and Liu Yang (right), two of seven pilots getting prepared to be launched into space for science and their country. On May 10th of last year, China appointed its final round of trainees (two women and five men) to their pre-taikonaut positions, but they did not reveal the identities of these chosen few.

No, where the discovery of the names of Wang Yaping and Liu Yang comes in is in the online shop of a German space enthusiast, revealed by a bit of philatelic detective work. You see, on May 10th, 2010, somebody sent this letter: 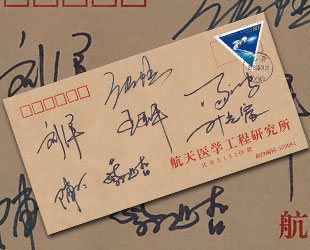 We know the date because of its postmark, and those seven signatures, according to Chinese space enthusiasts, correspond to five male pilots and two female pilots. And those women pilots are Wang Yaping and Liu Yang. According to Collect Space:

“Recent reports from China during the Tiangong-1 and Shenzhou 8 missions had mentioned that two women, together with seven men from the original 1998 taikonaut selection, formed the nine person training group for the anticipated Shenzhou 9 and 10 flights, [which are] planned to visit Tiangong-1 in 2012,” Quine said. “We can now be certain that the two women are Wang and Liu, and that, in all probability, one of them will become the first Chinese woman in space, within the next year.”

Wang Yaping and Liu Tang, you can count themselves as the only women in the world who can anticipate getting into space any time soon, and as such, we salute you!