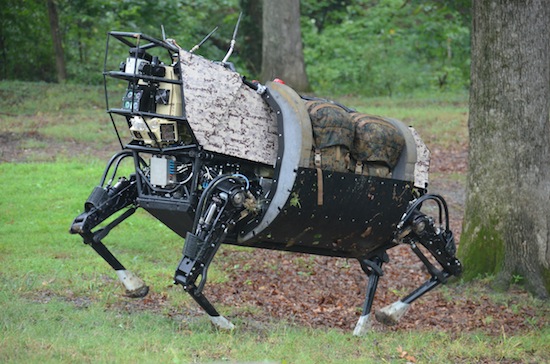 A few months back, we brought you video of the DARPA-funded, Boston Dynamics-built Legged Squad Support System (LS3) robot, known more familiarly as Alpha Dog. It looks like it’s time for another update, as yesterday saw the release of Alpha’ Dog’s newest trick — the ability to follow spoken orders issued by a human commander. At this point, Alpha Dog is one magical cricket away from being a real dog, and one more obedient than I’ve ever had. You can get a load of the robot responding to his master’s voice, and then following its human leader like a lovesick metal puppy in the video below.

In addition to following voice commands, the pack-mule-prototype Alpha Dog –which is built to accompany soldiers in the field and lighten their loads by lugging up to 400 pounds of gear without slowing, tiring, or even stopping for a bathroom break —  shows off some other impressive skills. The robot obediently follows its leaders its leader while navigating the trees, fallen logs, and muddy streams of a forest environment without a misstep, thanks to updates to its visual recognition capabilities.

Okay, it does make one misstep just after the two minute mark, in which it slips and rolls completely over, but Alpha Dog is absolutely adorable while doing so and also totally sticks the landing, so we’re willing to look the other way. In fact, thinking about it now, we’re not even sure it was a misstep. It might have just been a command to do a barrel roll that we didn’t hear. In which case — good dog.