Society’s Bisexual Hangups: How Chasing Amy Is Still Ahead of Its Time 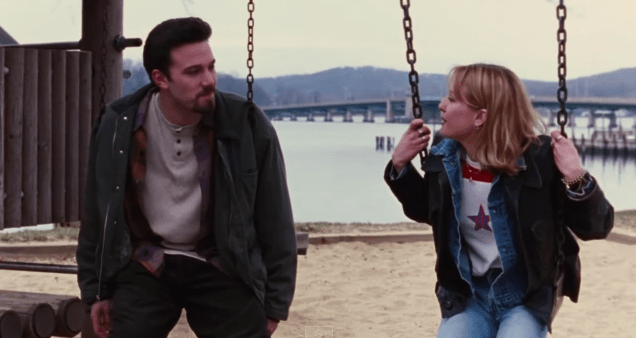 Bisexuals! In a nation that’s still struggling to wrap its societal head around the concept that maybe not everybody’s cisgender and straight and that also those people are real human beings, nothing is scarier than someone not fitting within the shakily established new binary (from “normal” and “freak” to “totes straight” and “the gayest”). As my extremely nervous and closeted high school self felt safe joking, bisexuals do the great service of giving homo and heterosexuals someone to bond over hating (and let us not get into pansexuals or the ace spectrum, individuals so invisible the illuminati take lessons from them).

Whether you view it as a phase, a way of continuing to “pass” in straight society, a sexy fanservice opportunity that can still be hooked up with a heterosexual love interest in the end, a lascivious villain out to draw every wide eyed or stalwart innocent into their life of depravity, or just referring to them as solely gay or straight depending on their partner at the time, there are a whole host of exciting ways to ignore and trivialize non-monosexual people.

That rather weary opener brings us to 1997’s Chasing Amy, Kevin Smith’s finest film and still one of the all-time indie greats. No doubt those familiar with the canon of queer film are raising some significant eyebrows at me right now, because advertising at time of release pretty well pigeonholed this flick as “that one movie where Ben Affleck “turns” a lesbian.” Not so, my friends! In fact, it’s one of the most sensitive exploration of the grey areas of romantic and sexual desire I can think of. 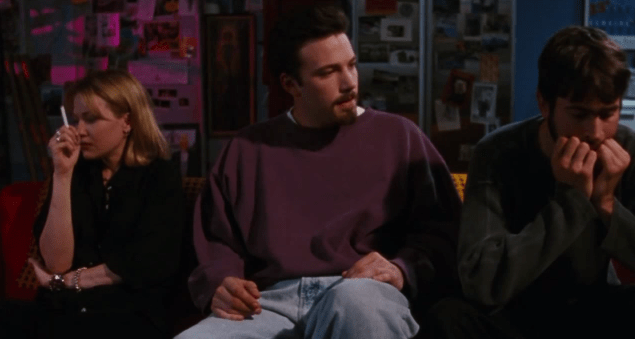 A quick summary: Holden works with his friend Banky on a popular comic called Bluntman and Chronic. At a convention, he meets Alyssa Jones, a much smaller indie comic and lesbian, and befriends her before ultimately falling her. The two eventually begin a relationship; but while Alyssa is prepared to face being shunned by her community for her new partner, Holden finds himself gripped with a mounting jealousy when he learns that he isn’t Alyssa’s first male partner.

Before we start, I do want to mention that I can think of many reasons why a queer person might not want to engage with this film: the stereotype that lesbians “just need the right man” has been a pervasive and dangerous one throughout American history, one that often leads to horrifying abuse and assault on queer women in an attempt to “fix” them. To see the idea of “turning” being considered in even a semi-comedic film and by a straight male director no doubt is an absolute horror on principle for those who have suffered or known someone who has. I don’t, can’t begrudge that stance for even a second.

Setting that aside, I’m convinced Chasing Amy is the best version of itself it could possibly be. Smith’s always leaned toward including homoeroticism in his films (usually via the closeted Jay) because of his close relationship with his happily out brother; additionally, Smith went over the film’s script with friends and lesbian filmmakers Guinevere Turner and Rose Troche to make sure he was being true to the queer experience of the time (or at least not offensively off the mark); and finally, the script itself doesn’t claim to speak for Alyssa’s experience but instead frames itself around Holden’s ignorance and insecurities as a straight man (and the harm that they do).

Holden’s issues are familiar ones for those familiar with the meeting point of straight and queer culture. He’s not quite a “nice guy,” but he gets to be the sort of Ideal Dude in the early parts of the film. His insensitivity is born of ignorance, and once he befriends Alyssa he starts thinking about lesbians as (gasp) people over stereotypes and calling Banky out for his casual use of slurs. But his character arc doesn’t get to rest there – that would be far too easy, a nice fantasy that pats the “understanding” straight person on the back and then rewards them with their unattainable romantic partner.

Once Holden and Alyssa actually start dating, the film isn’t shy about bringing out his more entrenched, less easily defined prejudices and insecurities, particularly once he learns that Alyssa has had male as well as female partners. There’s an undercurrent of sexism to it (that Alyssa herself calls out), that he’s “conquered” this person by being the first male partner (and thus the first experience of, on some level, “real” sex that she’s had). His increased jealousy is a common mentality too – it’s a widely held urban legend that bisexual people are too sexual for a monogamous relationship, that it’s only a matter of time until they cheat or run off with a partner of a different gender. Preposterous fear-mongering, but pervasive nonetheless.

What might be most unique about the film is that it doesn’t shy away from depicting how this prejudice cuts both ways. The “pronoun game” scene is downright brutal, with all of Alyssa’s friends treating her like she’s died once she announces that she’s seeing Holden. There’s a real concept of “betrayal” to it, a reminder that the gay community was well into forming its own qualifications for what constituted being an acceptable member. When Alyssa clings most fiercely to her identification as a gay woman (which is perfectly valid! But not as set in stone as the political movement of “born this way” shaped it), it’s not hard to get the sense that it’s partly because that’s what the narrative dictates (though bless the film for the very necessary step of making sure its ending beat drives home that Alyssa was never “cured” of anything). 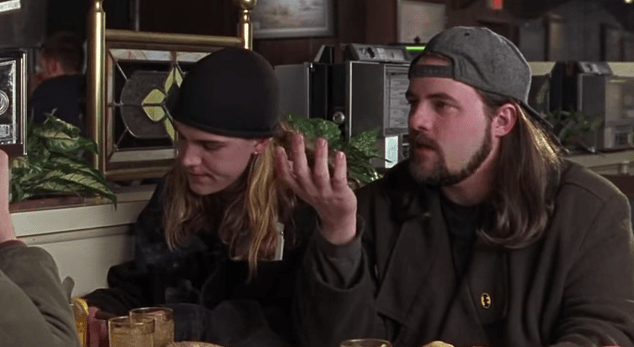 This is by no means an uncommon thing. It is, in fact, quite common for bisexuals (pan/ace/etc, but we’re going to use bi for ease of reference) to feel pressured to identify as the sexuality of their partner. This is especially true for bisexual men, who are looked at with mistrust by gay partners and as walking HIV threats by straight partners. As understanding of sexuality and new generations have come about this has also led to something of a stratification of “real” vs. “trendy” queer people (even in that good old bastion of queerness, Tumblr).

Grey areas of sexuality get nudged under the rug because the community has had to fight so hard to drag itself out from under the religious right’s “This is a sinful choice” accusation, and the idea that there are people who aren’t hard wired on either side of the binary wasn’t a subtlety that made for a convincing unified front (there is a similar battle currently occurring with trans individuals, crafting a narrative that doesn’t leave a whole lot of room for people who can’t or don’t want to transition, or find themselves between or outside the traditional settings of the gender binary). Coming out as bisexual became an opportunity for homophobic voices to misread those people as evidence that gay people can be “fixed” to prefer heterosexual relationships, and the undercurrent of resentment for that seems to remain still (along with a fondness for tossing the “weird” outliers or more visibly queer individuals under the bus in the name of looking respectable). Issues like these are delicate and complex, and the nuanced discussions between members of the queer community get pushed aside and too often forgotten in the name of trying to protect the community as a whole from subjugation.

Take, for example, the “born this way” narrative: often troublesome for queer individuals who aren’t sure of themselves from a very early age or who change along with various stages of their life, it can become an absolutist stance that can cause stratification within the community of “gold star”/”real” gay people and everyone else; simultaneously, “born this way” can still be crucial in protecting young individuals who might face violence or “corrective therapy” from a toxic home situation (take the tragic death of Leelah Alcorn – there was no shortage of people aware enough to say that she should’ve been protected and validated in her identity, while at the same time an enormous part of her desperation was the false and dangerous belief that being a “real” trans person can only be achieved by surgically transitioning and doing so at a young age).

Pop culture as a whole doesn’t leave much room for this lost group on either side, by the way. Take your pick: Katy Perry’s “I Kissed a Girl” on one side, that classic anthem of “isn’t it daring and naughty that I’m making out with this unsuspecting girl don’t worry I like dick though did I mention the boyfriend I totally have” (at least when Cobra Starship did the parody version they were upfront about the self-centered nastiness involved); on the other side Glee’s “Blame it on the Alcohol,” wherein one character questions whether he might be bisexual only to be straight up told by the show’s most visible gay character that no, no, “bisexual” is just a term made up by gay people who aren’t brave enough to come all the way out yet (a statement the episode is pretty happy to go on and prove “right” by having said character decide his orientation-questioning was based purely on drunkenness). And of course, for media figures who identify as bi there is the constant questioning of their validity.

These issues are ongoing, nebulous, and entrenched in decades of homophobia, individual abuse and cultural subjugation. All that one film can ultimately manage is to tell its story of three individuals with sharp, poignant clarity (and a lot of sex jokes, because this is a Kevin Smith film). What tears Alyssa, Holden, and Banky (the film’s angry, repressed bisexual who frankly could merit his very own essay) apart is ultimately their inability to accept that they’re in different places in their sexual lives, forced to a breaking point by Holden’s outsider insistence that he knows how to fix everything if people would just listen to him. It’s about fear, insecurity and jealousy overwhelming love and communication, letting its characters pass through these larger, unsolved concerns while letting them exists as people in their own right. And (90s snapshot costume design aside) that’s what makes it timeless. 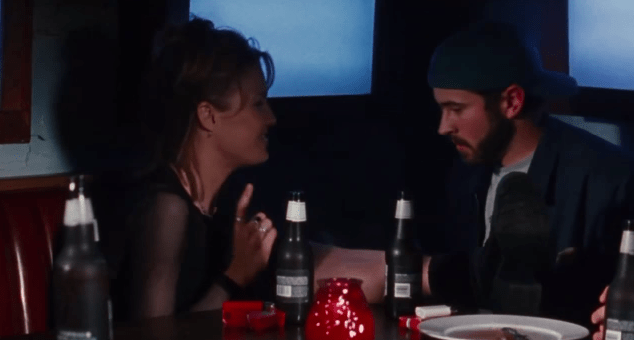 That, and it has the single best riff on Jaws I’ve ever seen.

Vrai is a queer author and pop culture blogger; they’re 95% certain they still geek out about cartoons across all dimensions. You can read more essays and find out about their fiction at Fashionable Tinfoil Accessories, support their work viaPatreon or PayPal, or remind them of the existence of Tweets.