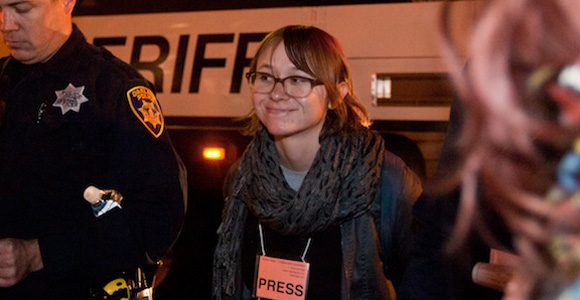 There’s an update in the story of cartoonist/journalist Susie Cagle and her arrest while covering Occupy Oakland. Charges have been dropped but it certainly wasn’t easy and it wasn’t through any doing of her own. You can bet the artist has not given up reporting about the entire affair.

When last we picked up Cagle’s story, she had finally got out the events of her arrest in her own words. She was arrested last month along with Occupy Oakland protesters even though she was wearing press credentials and recognized as a journalist on site. She then endured a degrading series of events while in custody.

First, we were split up by gender for transport a few blocks south to be booked. This took three hours. Upon arrival at North County jail, we were searched by Alameda County sheriffs (“Do you have any weapons of mass destruction?” they asked while grabbing at our breasts) and urine tested for pregnancy. That night bled into day, when all 25 women were transferred to another jail 40 minutes outside Oakland, because no jail in the city is technically equipped to handle female inmates.

After transfer, we were subjected to another round of searches, this time more invasive than the last. While standing single file in a hallway with male inmates leering and licking the windows in their cell doors, we were told to hold out our bras and shake our breasts. “Come on, ladies, shimmy,” said one sheriff. “Get into it. Shimmy.”

But now, MediaBistro reports that Cagle has been cleared of all charges by the Oakland Police Department who treated her so delightfully during her time with them. “Cagle’s legal situation was greatly assisted by the Society of Professional Journalists, who, shortly before Thanksgiving, penned a letter to Oakland Police Chief Howard Jordan condemning Cagle’s arrest,” they said. “Cagle tells FishbowlLA that Oakland PD’s Public Information Officer Johnna Watson confirmed to her that the SPJ’s letter is what eventually got her charges dropped. ‘Not the massive amount of media I did afterwards, or my tell-all article shared hundreds of times — it had to come directly across their desk.'”

In the letter, viewable on MediaBistro’s website, the SPJ wrote, “Cagle’s arrest never should have occurred. It is clearly in contravention of Section 10 of OPD’s Crowd Management/Crowd Control Policy, which states, ‘Even after a dispersal order has been given clearly identified media shall be permitted to carry out their professional duties in any area where arrests are being made, unless their presence would unduly interfere with the enforcement action.'” In addition, “The incident sets an alarming precedent.”

Cagle previously said, ““The truly shocking thing about my jail experience is that it is not actually shocking at all. That stuff happens all the time.” She continues to tweet about not just her experience but the Occupy movement as a whole and has been posting her illustrations and related work on her website.