The Mary Sue Interviews Caroline Skinner of Doctor Who 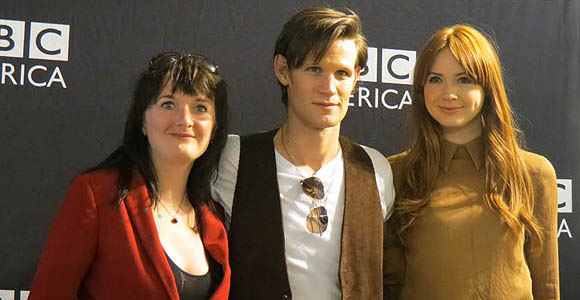 The modern era of BBC’s Doctor Who has been lucky to have some fantastic Executive Producers in its time. There was Russell T. Davies of course, Julie Gardner, Phil Collinson, Piers Wenger, and most recently, Steven Moffat. But new to the ranks for Season 7 is Caroline Skinner, who just happened to also be an Executive Producer on Masterpiece’s The Ruby in the Smoke starring Doctor Who’s Matt Smith and Billie Piper. Familiarities aside, Skinner has a big job ahead of her but is up to the task. She’s a life-long Whovian and thinks Season 7 will be the best yet. Read on to hear what she had to tell us in our recent interview session and check out our chat with star Karen Gillan if you haven’t already!

The Mary Sue: What’s it like jumping into Doctor Who?

Caroline Skinner: It’s incredible. I don’t think I’ve stopped since the day that I began but you know, it’s such a wonderful show and such a brilliant, brilliant team of people. The first time that I probably met Steven to talk about it, we sat down and – he’s brilliant at pitching – but he pitched me thirteen episodes in a row. And I just went, “Those ideas are just so enormous.” How thrilling, how thrilling. It’s been an absolute ride. And I think the other thing that is just so extraordinary is how brilliant Matt, Karen, and Arthur are because they’ve got huge, huge things to do every week, enormous speeches to learn, and they make it look absolutely effortless and they’re just an absolute joy to work with. It’s brilliant because just at this point, where I’ve been working on it for quite a long time now, and we’re just about to show these five episodes to everybody, and I’m just so delighted by them and the reaction that we’re starting to get. That in itself and the reaction that we’ve started to have from the fans who’ve seen just the trailers is extraordinary. It’s a great feeling.

How do you top the plot of Season 6?

CS: I think that these episodes feel absolutely enormous and what we wanted to do was to make this run of five feel as if they were five really epic blockbuster movie ideas every week. And I think that we’ve really done that. What we always talked about was you’d go, “Wow, this is a big movie title.” “Asylum of the Daleks,” “Dinosaurs on a Spaceship,” and you get to the end of that episode and you’d see the next title card come up and you’d go, “how do they top that…oh! That’s how they’re gonna do it!” And our final episode is set right here in New York and it’s a beautiful episode called “The Angels Take Manhattan” and obviously everybody knows that’s Amy and Rory’s final episode but it is an enormous, enormous, scary, atmospheric story. How do you top that? I think, I hope, that [we] will.

What do you do to put your own stamp on the show?

CS: That’s a really interesting question. I mean, I think that Doctor Who is a really interesting show anyway because the essence of Doctor Who is about change, so I think it’s been a very organic process for me. I watched what they did in Season 6 and that really set the bar enormously high. You’ve got the shoot in Utah, you’ve got the Silence, you’ve got that enormous serial arc. So you kind of walk into a show that’s operating on that level and  getting the reaction that it does internationally, with a certain amount of excitement but also massive fear. And I guess Steven has such a huge and brilliant imagination that what I wanted to do was to help him execute all of those ideas that he’d  got burning away in his mind to the best of my ability. This wasn’t about wanting to change things for the sake of it, but I think that the show has taken a different direction this year with these big standalone stories and the more of the episodes we complete, the more they feel like Doctor Who’s crazy twist on a big genre idea. So that’s what I’ve been doing really, is pushing everything, pushing production values, making sure the writers are really going for it and try to make sure that all of Steven’s epic ideas are realized as fully as they can be.

What about the historical accuracy of the show?

CS: It’s a huge concern. I think as big and as crazy and as far into time and space the ideas of Doctor Who go, every good story rests in truth, really. It’s really important to everybody to get the context and the settings to every story as accurately and as right as possible. For instance, there’s an episode that’s set in the Wild West, and it’s set last century in the Wild West, and there’s some beautiful lines that Toby Whithouse has put in there about it being a few years too early for electricity. And we’ve got a really dedicated story team who research all of those details and our art department wouldn’t make or build anything that was inaccurate. Obviously there’s a lot more freedom when you’re out in the middle of outerspace, sort of less research. Our design team are just phenomenal. It feels as if some of the imagery in this run of five episodes is just really, really beautiful.

What impact has the increased fan and photographer interest internationally had on the production of the show?

CS: We try, to the best of our ability, to let as few spoilers go out as we possibly can do and I fervently  believe, as does Matt and as does Steven, that actually, if you’re a fan, you should be enjoying the story as it happens and that people who want to break those stories aren’t really, truly fans of the show because they’re spoiling everyone else’s enjoyment of it. I mean, it’s inevitable that people are going to want to come to set and take pictures and that’s a fact of shooting outside. And of course we take as many precautions as we possibly can do and if we’ve got key things we know we’re shooting in an exterior location we’ll try and protect that monster or that shot as much as we can do but out on the streets of Cardiff, if we shoot out there, there’ll always be a group of people there. When we’re in New York, we had hundreds of people! It was the most extraordinary experience of my career and then some. The flip side of that is that, yeah, they did take pictures of the people in Central Park, [but] those pictures weren’t really spoilers because everybody knew that we were there and the reaction and the love from the fans from over here just blew everybody’s minds. I’d never say the fans shouldn’t come and watch us film, it’s if they were trying to give away spoilers or try and give away plot details, and through doing that it would be a huge shame.

The Mary Sue: Were you a fan of the show way back when or did you come to it more recently?

CS: No, I’ve always been a fan of the show. I think that everyone in the UK kind of gets born with Doctor Who in their DNA to an extent. It’s one of the most incredible things about working on this show is that you can never meet anybody who doesn’t have an opinion or hasn’t grown up with one or another of the Doctors, who doesn’t know what it is, in the UK. My dad was an enormous fan of all things fantasy and science fiction and he sat me down at way too young an age and made me watch them all and there I was behind the sofa with Tom Baker. That’s one of the really wonderful things about working on – I mean, I’m not quite as obsessed with it as Steven Moffat – but most people who do work on the show have that exact same background, whatever generation they are as fans. And I think the fact that everyone loves it so much actually really shows on screen because it’s something really crafted with a huge amount of devotion.

For our interview with the Doctor himself, Matt Smith, the perfect addition to the day the Doctor returns, remember to come back to The Mary Sue tomorrow around this time!