Here’s What U.S. Attorney Carmen Ortiz Has to Say About the Prosecution of Aaron Swartz 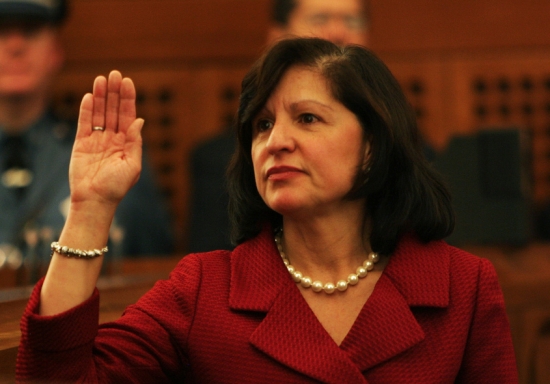 Aaron Swartz‘s suicide last week was just the beginning. The public outcry from the tech community has been massive, with a petition to remove the prosecuting attorney for Aaron’s case, one Carmen Ortiz, from office hitting the required number of signatures for an official White House response relatively quickly. In large part, a majority of these complaints center around the opinion that the prosecution was overzealous at best. Ortiz, for her part, has remained mum on the subject. Until last night, that is. Her office has released an official statement on the matter of Swartz’s prosecution and, uh, it’s… definitely something.

Basically, Ortiz excuses the actions of her office. Her “office’s conduct was appropriate in bringing and handling [Swartz’s] case.” They didn’t do anything wrong during the course of their prosecution. They were just following the law, people! They’re not the bad guys here. That’s the argument, anyway.

The statement also seems to contradict reports that the prosecution was trying to throw the book at Swartz, as it says, “[a]t no time did this office ever seek – or ever tell Mr. Swartz’s attorneys that it intended to seek – maximum penalties under the law.” Is it just me, or does that sound like splitting hairs? Maybe they never told Swartz’s attorneys that they were seeking maximum penalties, but that wouldn’t stop them from, you know, suggesting that he could potentially receive a stupid number of years in prison.

Overall, the whole thing smells, but maybe my perception of it’s skewed. Go ahead and give it a read. It’s reproduced in full below:

As a parent and a sister, I can only imagine the pain felt by the family and friends of Aaron Swartz, and I want to extend my heartfelt sympathy to everyone who knew and loved this young man. I know that there is little I can say to abate the anger felt by those who believe that this office’s prosecution of Mr. Swartz was unwarranted and somehow led to the tragic result of him taking his own life.

I must, however, make clear that this office’s conduct was appropriate in bringing and handling this case. The career prosecutors handling this matter took on the difficult task of enforcing a law they had taken an oath to uphold, and did so reasonably. The prosecutors recognized that there was no evidence against Mr. Swartz indicating that he committed his acts for personal financial gain, and they recognized that his conduct – while a violation of the law – did not warrant the severe punishments authorized by Congress and called for by the Sentencing Guidelines in appropriate cases. That is why in the discussions with his counsel about a resolution of the case this office sought an appropriate sentence that matched the alleged conduct – a sentence that we would recommend to the judge of six months in a low security setting. While at the same time, his defense counsel would have been free to recommend a sentence of probation. Ultimately, any sentence imposed would have been up to the judge. At no time did this office ever seek – or ever tell Mr. Swartz’s attorneys that it intended to seek – maximum penalties under the law.

As federal prosecutors, our mission includes protecting the use of computers and the Internet by enforcing the law as fairly and responsibly as possible. We strive to do our best to fulfill this mission every day.

(via The Wall Street Journal, The Verge, image via Deval Patrick)