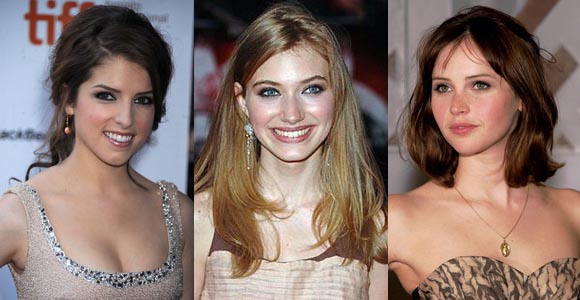 Over the weekend we learned Marvel was narrowing down its search for a director of their Guardians of the Galaxy movie but the Captain America camp was busy looking for a leading lady. It seems Anna Kendrick, Imogen Poots, and Felicity Jones are the frontrunners to play opposite Chris Evans in Captain America: Winter Soldier.

The NY Post were the first to name the actresses in the running. Here’s all they had to say:

Hollywood insiders tell us that current front-runners for the coveted role include “The Twilight Saga” star Anna Kendrick, as well as Felicity Jones, who reportedly lost out to Keira Knightley for the lead in Paramount’s untitled Jack Ryan reboot. Imogen Poots, who’s filming Terrence Malick’s “Knight of Cups,” is also in the running, we’re told.

We know that Winter Soldier will be set in modern times thanks to Steve Rogers being frozen at the end of his first solo film. That means Hayley Atwell’s Peggy Carter will likely sit this one out unless they decide to bring her back as an old woman or use flashbacks. While Atwell didn’t have a role in The Avengers, she did seem hopeful for a return in a second Cap film. ”I haven’t heard anything; I haven’t been approached,” she said in January. “Of course if they were to bring me back or ask if I was interested, I’d definitely love to go back and revisit that role and develop her.”

With that in mind, Kendrick, Poots, and Jones may be in the running to play Peggy’s neice, Sharon Carter who goes by the codename Agent 13. She’s also an agent of S.H.I.E.L.D. and yes, sometimes girlfriend of Steve Rogers.

Who do you think would do the role justice?