To Save Money, Canada Kills the Penny 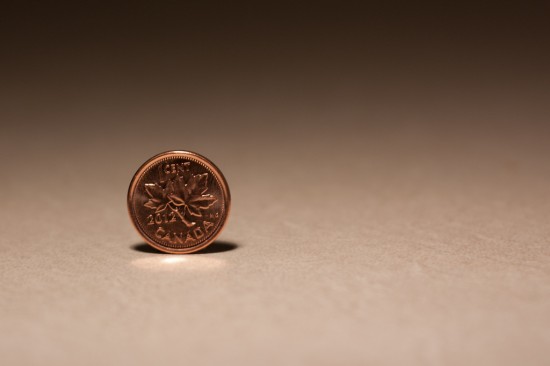 In the 104 years since Canada’s introduction of the penny, there have been some 35 billion of the coins minted. However, in that time the purchasing power of the humble single cent piece has dropped dramatically, while the cost of minting pennies has risen. With all this in mind, Canada has announced that it will cease production of pennies next month.

So let’s look at the numbers: According to the Canadian government’s own budget proposal which announces the end of the penny, the coin now has 1/25 the purchasing power it did when it was introduced in 1908. The penny alone doesn’t get you much, and is really just used as a means to make change. But to make that change, the government has to spend more than a penny — about 1.6 cents — to mint and distribute the coins. That high figure includes the addition of recycled materials in the printing process.

That lost .6 cents starts to add up, and by axing the penny the Canadian government expects to save $11 million a year. Businesses, too, should see savings by no longer having to transport or deal with pennies. Bloomberg estimates that banks will see a $20 million savings per year. All of these factors led the Canadian government to declare that the national mint would no longer strike new pennies starting this April.

For consumers, this means that rounding will be the name of the game. For all prices, after tax of course, businesses will round up or round down based on government issued standards. Prices ending in .01, .02, .06, and .07 will be rounded down to the nearest dollar or nickel amount. Prices ending in .03, .04, .08, and .09 will be rounded up, accordingly. The penny will continue to be accepted indefinitely, and rounding rules will not apply to purchases made by check or credit/debit cards.

Consumers may be worried about effectively getting screwed out of a few pennies here and there. However, the Canadian government points to the successful elimination of the penny in other countries like the U.K., Australia, and Norway, among others. Quoted by Bloomberg news, Royal Bank of Canada’s chief economist Craig Wright assures people that the cost to consumers will balance out:

“If there’s a rounding up, you’d see a rounding down somewhere else[.]”

With the United States’ neighbor to the north eliminating the copper piece, now would be a good time for our own government to revisit the issue. According to Wikipedia, it currently costs the U.S. mint 2.41 cents to mint a single penny, for an overall cost of $60,200,000 a year. And copper isn’t getting any cheaper, either. With more and more purchases being made electronically, there is simply no rational reason to keep the coin. However, convincing Americans to give up a few cents here and there might be a tricky sell.

(Government of Canada Budget 2012 via Bloomberg, image via tyfn)