Can We All Please Just Ignore Crazy, Racist Statements About The French-Muslim Batman-Helper 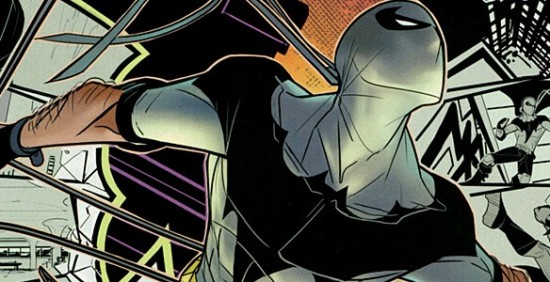 In case you’ve been out of the loop (and it’s a pretty tiny loop, so you could easily be excused) there’s more than one Batman now.  Also, one of those Batmans (the original flavor) has been travelling around the world recruiting more Batmans to be his Little Helpers.

I’ll let that sink in.

There has been some controversy over the French-Batman’s-Little-Helper Nightrunner, who is a young French-born Muslim from Clichy-Sous-Bois, the neighborhood rocked by riots in 2005, who was motivated by the death of a radical friend at the hands of the police to fight against Islamic nationals and terrorists in the French state.

There are some internet people who think is its quite the travesty that DC Comics decided to make Batman welcome a Muslim guy into his organization.  How do I know this?  Because the sites I go to for comics news have each posted articles about the people and the crazy things they said.  Blog articles highlighted by Bleeding Cool, Comics Alliance and Robot 6 run the gamut of expected themes for these sort of statements, including generous dollops of harmful Muslim stereotyping, admissions that the writer has never read a Batman comic before, accusing DC of being too PC, accusing DC of being leftist, and, last but not least, implying that DC hates soldiers because Batman insists you can’t be a hero if you kill people.

However, it is considerate of American bloggers to worry about the pride of French citizens of European descent being hurt by the choice of a non-European-descended guy to represent their country in a comic book that none of them will probably read anyway because France has its own comics industry that is in many respects more accepted as a legitimate artform by its surrounding culture than ours.

In a post refuting an opinion about a writing decision I might otherwise spend some time describing in detail why a conflicted, modern, minority character who is personally connected with France’s biggest current little-spoken-of problem is about 200% more interesting then a lily-white Musketeer (the original plan for the character) who has everything to do with the France of 200 years ago and nothing to do with the France of today.

But I’m not.  Why?  Because good ideas shouldn’t have to justify themselves to racism and religious intolerance.  Note that I did not say “racists” and “the intolerant.”  It doesn’t particularly matter to me what random people on the internet are.  What they have said is racist and intolerant.  It’s also just dumb.

So let’s get one thing straight:

People saying intolerant things on the internet is not news, it’s not surprising, it’s not unusual, and there’s no need for debate on it.  They are wrong.  Stop giving traffic to nutjobs.  And yes: in this information age, continuing to insist that a specific religion is mutually exclusive with not being a terrorist is a kind of willful insanity.