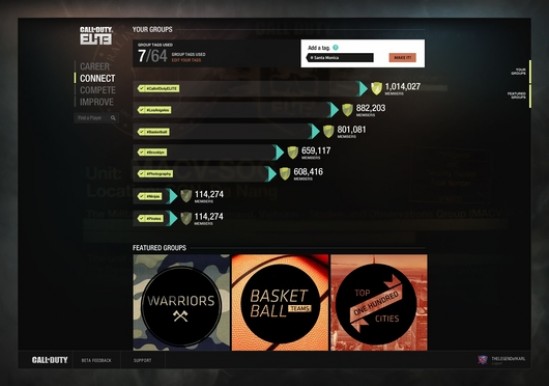 Activision Blizzard announced the oft-rumored Call of Duty subscription fee service today: Call of Duty Elite, basically a social network for Call of Duty players. The network will launch its beta this summer, first being implemented with last November’s Call of Duty: Black Ops, and the full service will be integrated with Call of Duty’s next installment, Modern Warfare 3. Activision hasn’t yet announced the price, but mentioned they are projecting it will be less than “fees for comparable online-entertainment services.”

The service offers what any sensible gamer would expect: Basic social networking features, the ability to make groups and clans, participate in tournaments, stat-tracking, and the ability to upload videos and screenshots and have users vote on which they feel are the best. Not exactly worth a monthly subscription fee? The service also offers in-depth stat-tracking, such as heat maps detailing where the player gets shot, the ability to review the minute-by-minute progression of a match, as well as aggregate data, like which weapons were used to obtain the most kills on a certain map and where the most deaths occur on a map. The subscription fee is also planned to allow subscribers access to free map packs that players will ignore while sticking to their favorite originals, whereas non-subscribers would have to purchase them separately. So, still not exactly worth its monthly subscription fee, unless you take your yearly-iterated war gaming very seriously. Luckily for Call of Duty gamers who don’t exactly want to add a Call of Duty subscription to their monthly budget, Activision stated that the base game will still ship with regular multiplayer functionality that will not cost a monthly fee. Head on past the break to see the official trailer announcement, which details many of the new network’s features.