On a related note, every statue of Bruce Lee that's ever been erected has also been shirtless. 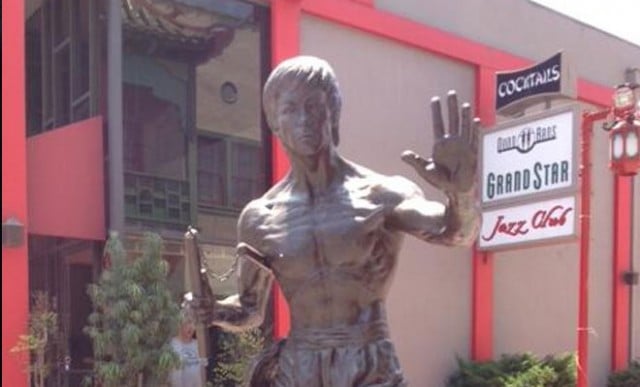 Geekosystem’s office is in New York City, and while I wouldn’t want to be anywhere else, I’ve got to admit that we have terrible pop culture-centic statues compared to some other cities. Philadelphia has Rocky, Milwaukee has The Fonz, Palm Springs had that enormous Marilyn Monroe — heck, Detroit’s getting a RoboCop! And what do we have? A statue of Ralph Kramden from The Honeymooners hanging out next to the Port Authority Bus Terminal. It’s practically a slap in the face. So the news that the Chinatown district of Los Angeles recently erected a seven foot tall statue of Bruce Lee, in all his shirtless nunchuck-slinging glory, has me a bit miffed. We have a loudmouth bus driver and they have Bruce Lee? Man, screw New York.

Unveiled on Saturday to a crowd of hundreds, this statue clocks in at 7.6 feet of rippling bronze muscle and was donated by the Bruce Lee Foundation, a nonprofit organization created to honor the martial arts star’s legacy. Lee spent most of his childhood in Hong Kong, but was born in San Francisco and moved to L.A’s Chinatown in the 60s to start his acting career and open a new martial arts school.

The unveiling was scheduled to celebrate the 75th anniversary of Chinatown and the 40th anniversary of Lee’s death. As of now, however, the statue is not a permanent fixture and still needs to actually be mounted to the ground in concrete, which will take another $150,000. I’d say that we should totally steal it and bring it back to Manhattan, but I have this irrational fear that Statue-Bruce would stab us in the throat with his metal fist if we tried it.

While this statue doesn’t have quite the same gorgeous background scenery as the statue of Bruce Lee in Hong Kong, it’s got nunchucks, which are pretty freaking cool. Then again, so does the Bruce Lee statue in Bosnia and that one’s also much shinier. And then there’s that giant one outside of Beijing  — wait, how many Bruce Lee statues are there exactly? And we don’t have one? Why the heck not? It’s not like he ever actually went to Bosnia, so there’s really no excuse for New York to not have a Bruce Lee Statue. Get on it, Bloomberg.

(via The Hollywood Reporter, image via Indian Express)