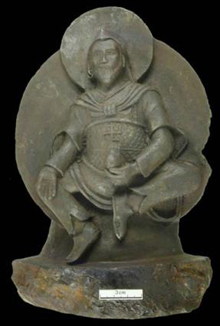 Prepare for the conspiracy theories, because here’s today’s most improbable story: Scientists have confirmed that a Buddhist statue, known as the “iron man,” obtained by Nazis from Tibet is actually from space. Specifically, the thing was likely made from a massive chunk of the Chinga meteorite that deposited itself across the border of Russia and Mongolia somewhere between 10,000 and 20,000 years ago.

Nature explains that those carving the thing likely knew what material they were using:

Given the extreme hardness of the meteorite — “basically an inappropriate material for producing sculptures” the paper notes — the artist or artists who created it may have known their material was special, the researchers say. [Elmar] Buchner suggests that it could have been produced by the 11th century Bon culture, but the exact origin and age of the statue — as opposed to the meteorite it is made from — is still unknown.

It was in the late 1930s that the Nazis supposedly stumbled across the relic, and brought it back because it happened to have a swastika in the middle. They might have somehow supposed it was from out of this world, though that’s only speculation. What we do know is that they apparently had good taste.

(via Nature, image via Elmar Buchner)