Bruce Campbell Back in Oz | The Mary Sue

A Hanukkah Miracle: Bruce Campbell Is Back in Oz: The Great and Powerful! 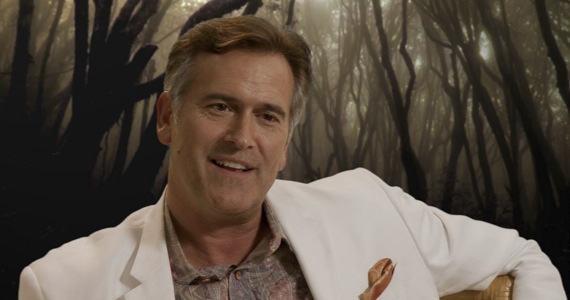 If you were disappointed last month to hear that dashing man-about-town/cult favorite Bruce Campbell was cut from Sam Raimi‘s upcoming Oz: The Great and Powerful, we have some very excellent news to share with you! Apparently, the scene that was cut is back in, and now we will see yet another “pivotal” Campbell cameo in a Sam Raimi movie. It’s better than Christmas, because Hanukkah is already here! A Hanukkah miracle, indeed!

We broke the bad news in early November in a quick item after initially reporting in August that Campbell was, indeed, going to be a part of The Great and Powerful Oz. (Even though he had no idea who he was playing.) But as is the nature of the business they call “show,” Campbell’s scene found itself left behind before it was even shot.

And now, he’s back! In an interview on The Shiznet, Campbell discloses little about his actual character, but 1. reveals that the scene has been shot, and 2. there is a “confrontation” between his character and Oz (James Franco):

“The scene that I shot was a page and it took all day. It was great to see the scope of Oz and to see the detail, and the craftsmanship and the professionalism and the incredible stuff that they’re doing visually in every other way. I play a pivotal role. It involves me and Oz — that’s James Franco — and let’s just say that we have a confrontation. It was a very fun role to do actually.”

Bruce Campbell is wonderful. And I’m willing to bet that he isn’t totally joking about playing a “pivotal role,” despite his small amount of screen time. After all, his “pivotal role” in 2002’s Spider-Man was nothing to sneeze at — he gave Spider-Man his name.

In addition to Franco (and Campbell), Oz: The Great and Powerful will also star Mila Kunis, Rachel Weisz, Michelle Williams, and, in case you were wondering, Ted Raimi, whom they will probably find some means to torture. The film is scheduled to hit theaters March 8, 2013.