Plus other awesome prizes! 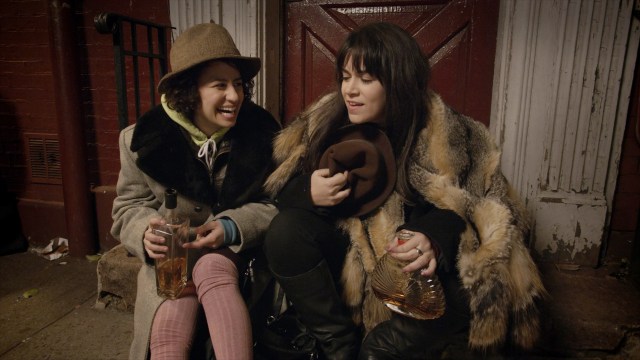 Next thing you know, you’re backstage at Barclays with RiRi and BeyBey and then you are just laughin’, sippin’ on champagne with, like, candelight.

In all seriousness, Broad City (now out on DVD!) is one of the funniest, raunchiest, surprisingly accurate depictions of living in New York City that’s currently on TV (you know that scene where Ilana maps out her public transit route to get to Abbi’s apartment and it takes at least an hour to get from Brooklyn to Astoria? That’s 100% not wrong), and it also happens to star two extremely talented ladies. What more could an avid comedy-watcher ask for?

If you’re a fan of the show—or even if you aren’t and just want to find out what you’ve been missing—then we’re offering you the chance to win some fabulous Broad City prizes. All you have to do is follow us on Twitter (this is mandatory or we won’t be able to contact you if you win), and tweet out the following (JUST the following, DO NOT @reply us):

(We’re referencing this scene, in case you were wondering. I won’t lie to you, it was hard to pick a quote from the show that wasn’t explicit.)

All entries must be received by Monday, December 8th, 12pm ET. One randomly selected grand prize winner will be selected to win a DVD of Broad City season one, an awesome t-shirt that says “Broad Fucking City” on it, and a map drawn by Abbi Jacobson that depicts all the different Broad City episode locations. Four runners-up will also win a copy of the season one DVD and their own map, but no t-shirt. Sorry, guess you’ll have to do your laundry after all.

Also, unfortunately the contest is only available to U.S. and Canada residents due to shipping constraints. At least you won’t have to run around all over New York City trying to get your package from the Post Office, though, right?

Here’s that map, by the way. It’s majestic. 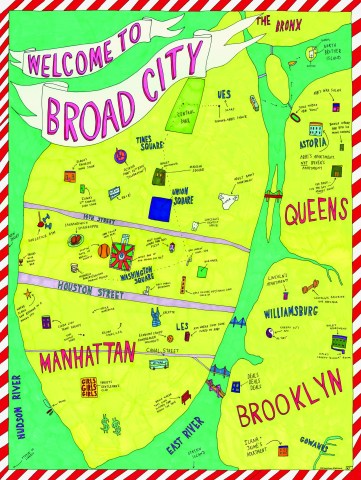 And here’s some more information about the season one DVD, out now: 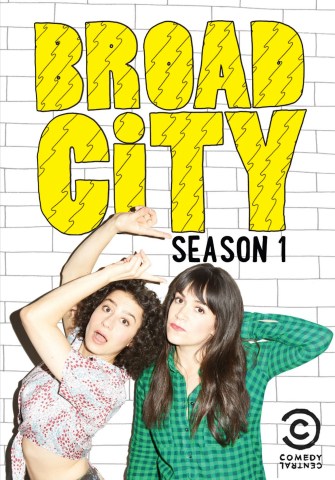 Making quick bank by “returning” office supplies from your temp job? Check. Identifying the suspicious stains on the rental apartment wall? Done. From the collective minds of Abbi Jacobson and Ilana Grazer, and executive produced by Amy Poehler, “Broad City” follows the adventures of two best friends working the big city. No matter how bad it gets, these broads are always down with whatever hits them.

Go enter! Just, whatever you do, don’t stick the discs anywhere other than your DVD player. The vayiaña may be nature’s pocket, but it probably can’t handle such oddly shaped cargo.