The British Royal Navy Gets Its First Female Warship Commander 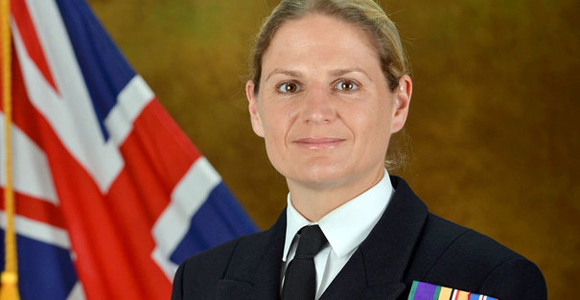 Commander Sarah West is going down in history. She’s just joined the British Royal Navy’s warship (or frigate if you want to get technical) HMS Portland as its first female commander. “”It is a challenge that I am fully trained for and ready to undertake,” she told press.

“Taking command of HMS Portland is definitely the highlight of my 16 years in the RN (Royal Navy) so far,” West told the Press Association of her placement.

You may remember a story we brought you last year about the Royal Navy making steps toward allowing British women to serve in submarines by 2013. Women first became involved in the navy in 1917 with the Women’s Royal Naval Service but disbanded in 1993 so they could integrate into the RN.

“In another milestone for the Royal Navy, Commander Sue Moore, 43, recently became the first woman to command a squadron of minor war vessels, the First Patrol Boat Squadron (1PBS), based in Portsmouth,” writes the PA.

“I am very proud to be taking command of a Type 23 frigate, which is an extremely flexible warship,” said West, who attended the Britannia Royal Naval College in 1995 and joined the Royal Navy as a warfare officer. “I’m looking forward to taking HMS Portland on operations with a professional and focused team.”

The Ministry of Defense said three minor warships should be commanded by women by the end of this year.

(via The Press Association)

British Royal Navywomen in the military