Bride of Frankenstein Gets Screenwriter, Wants Angelina Jolie to Star | The Mary Sue 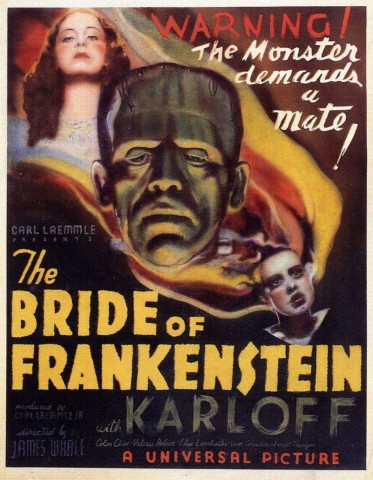 Universal Pictures has a Bride of Frankenstein reboot in the works! And for better or for worse, this next Frankenstein film doesn’t have anything to do with that campy, fan-fiction-spurring flop Victor Frankenstein, in which James McAvoy and Daniel Radcliffe recently starred. (That movie was by Fox, and this will be by Universal—this is sort of an Antz/A Bug’s Life situation.)

This reboot will be a re-imagining of the 1935 classic horror movie of the same title—a film that was also made by Universal Pictures, admittedly almost a century ago. No problem for the studio to get the rights, then, I guess!

Anyway, David Koepp is on board to write the screenplay; his name might sound familiar to you, since he wrote the first Jurassic Park, the first Mission: Impossible movie, and also the Spider-Man film in which Tobey Maguire starred. He’s also written several other movies.

Mysterious, unnamed sources have told Variety that Universal plans to approach Angelina Jolie to direct and star in the film. Doing both for a film like this seems like it’d be a heck of a lot of work, but what do I know?

This Bride of Frankenstein flick is part of Universal’s plan to reintroduce and reboot a bunch of their old monster movie properties, such as The Mummy and Van Helsing. Admittedly, Van Helsing wasn’t in the original 1920s-50s lineup, but he’s part of the theme, so we’ll take it.

Out of all these old movies, Bride of Frankenstein is the one I’d least expect to see get a remake. Although I have no idea what direction they’ll head with that old story, it’s kind of cool that the one female-led monster movie is going to get some love. Then again, Bride doesn’t have much to do with Mary Shelley’s original Frankenstein—even though Mary Shelley is sort of a character in the original Bride movie. (Watch it; it’s weird)

What do we think about this? Have you all seen the original film? What do you hope Universal will do to update the story? Are these old movies salvageable, or does this whole business decision strike you as … uh, monstrous?

(via Variety, image via Horror-Writers.net)