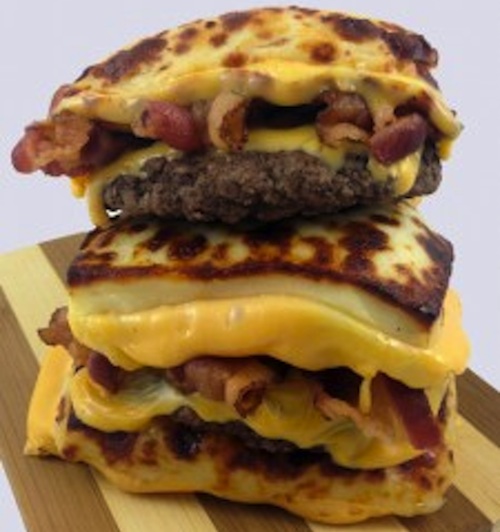 We don’t write about food a ton over here, so when we do, you can bet there’s something impressive about it. In the case of this double bacon cheeseburger served on bread cheese — a dense, baked cheese that, in a pinch, can serve as an admirable, if artery-clogging, substitute for bread — it’s that someone consumed this thing and survived all 4,300 fat and salt packed calories of it. I don’t know if that qualifies it as a good idea, but still, respect should be paid.

The Bread Cheese Double Bacon Cheeseburger was created by Nick of Dude Foods, who garnered headlines last month with his design of an all-cheese grilled cheese sandwich, served on skillet toasted bread cheese. It turns out that momentous feat of cheese engineering was merely the prelude to his latest masterpiece, a burger made up of three slices of toasted bread cheese, two 1/3 pound beef patties, 2 helpings of crisp, smoky bacon and slices of good old-fashioned American cheese. This is in turn, of course, only a prelude to the chef’s impending massive coronary, which is going to be delicious.

While there’s no doubt this is an inspired feat of meat and dairy architecture, it’s nothing you can’t recreate in your home. All you’ll need are few simple ingredients and a sense of adventure. One piece of advice from the cook if you do give it a try, though? Don’t hit the gym after consuming this beast, no matter how much you might feel you need to do some calorie burning.

I don’t know what exactly the burger did to my body, but I was already sweating before I even got there. After 15 minutes on the treadmill I was an absolute mess…. If you ever eat a 4,300 calorie cheeseburger DO NOT go to the gym immediately afterwards. This may be common sense for most of you, but apparently for me it isn’t. The burger was still totally worth it though.

Instead of the gym, I’d recommend pairing this with a tall cold beer and a long nap, as is right and sensible. No matter how well-intentioned you are, there is no amount of workout that will save you after consuming this 4,300 calorie burger. You are in the devil’s playground. Embrace it.