At least we'll always have Budapest.

We here at The Mary Sue are positively jubilant that Marvel finally has its first female-led superhero movie in Captain Marvel, but since Phase 3 was announced, many Black Widow fans have rightfully asked why two beloved female characters can’t get the standalone treatment. The #BlackWidowMovie hashtag has been taking off on Twitter, with plenty of fans identifying why both Natasha and Carol deserve their own films:

We should be getting a Captain Marvel AND a #BlackWidowMovie. There’s no heroine movie quota here, Marvel.

The idea that Natasha is a supporting character, who can only be seen in the context of others (white men), is why I need a #BlackWidowMovie — Amy von Doom (@spooloflies) November 2, 2014

The hashtag even caught the attention of comics writer Nathan Edmonson, who has written Black Widow’s ongoing series since the beginning of this year. On Monday, Edmonson even demonstrated his support of a standalone Natasha film by writing and publishing a six-page opener for a Black Widow movie:

@thebeckyford My pleasure. Here. I whipped this up a minute ago, just to prove I support! http://t.co/xKB9U9FDQP #blackwidowmovie

I’ve popped a screenshot of the first page in here, but you should absolutely also read the entire draft. For something that Edmonson “whipped up,” I sure am having emotions about it. 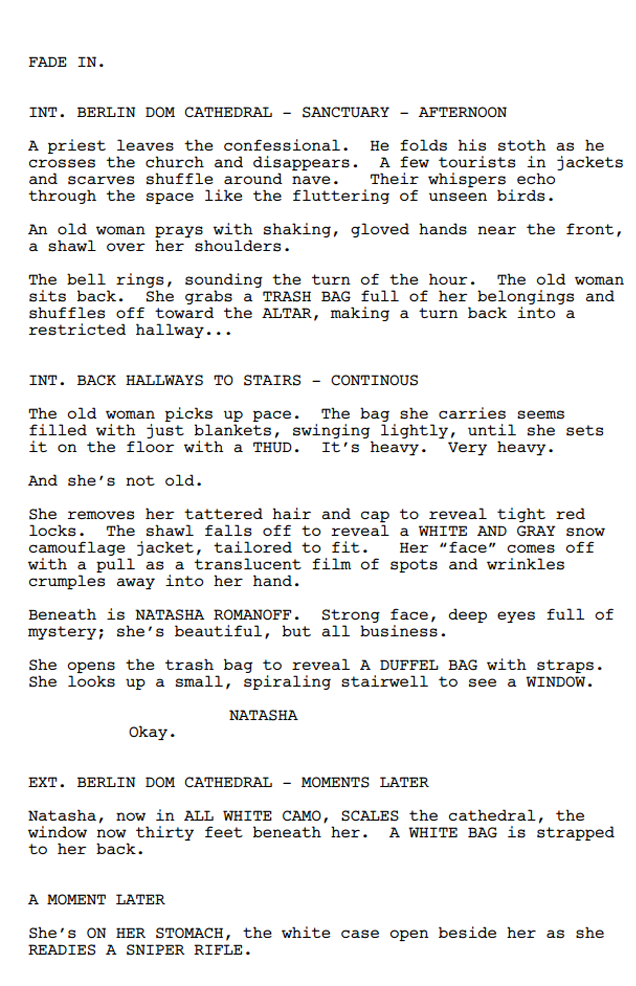 Of course, this isn’t the first time a Marvel employee has proven Natasha has what it takes for a successful standalone film. Back in August, Guardians of the Galaxy cowriter (and the first-ever female writer for a Marvel Studios movie) Nicole Perlman revealed that she wrote a treatment for a Black Widow movie way back in 2011.

At the time, Perlman explained lack of movement on the script by saying Marvel had “a lot on their plates,” and although it softens the blow now to know that some of those plates were occupied by plans for Captain Marvel, that doesn’t mean it’s unreasonable to want two female superhero movies. If Marvel wants to prove that it’s not just pandering to female fans, eventually they’ll have to rest more than one film on a woman’s shoulders.

Of course, I know that some fans recognize the ongoing need for more representation in Marvel films, but think Natasha isn’t compelling enough to deserve a solo outing. To them I say:

Movies that would be better than Ant Man. I would watch Black Widow files her taxes lol #BlackWidowMovie#BlackWidowpic.twitter.com/FWcZnEuMYp — Jennifer (@_J_enn_y_) November 5, 2014