Black Widow Is Not Buffy | The Mary Sue 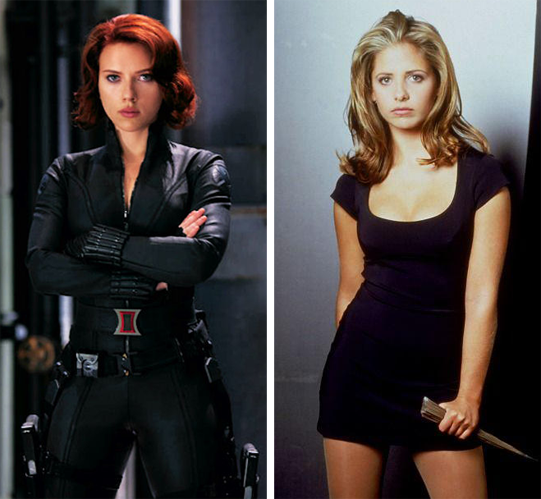 Spoilers ahead for Avengers: Age of Ultron, Avengers, Captain America 2: The Winter Soldier, Buffy: The Vampire Slayer, and Angel.

Last weekend, fans orchestrated a #WeWantWidow flash mob in response to the glaring lack of Black Widow representation. Not surprising — the scant merchandising surrounding the Avengers franchise, the denial of a solo movie, and her disappointing character development in Age of Ultron have all been topics plaguing the Marvel Cinematic Universe’s most recent portrayal of their first female Avenger. The message from the fans is clear: We want more Natasha Romanoff, and we want her story done right.

Flashback about five years — when it was revealed that Joss Whedon was taking the reins on the first Avengers movie, people wasted little time anticipating his take on Black Widow. As Whedon built his career on portrayals of Strong-Female-Characters starting with the eponymous Buffy the Vampire Slayer, the inevitable comparisons between these leading ladies even culminated in Joss himself writing up a hypothetical fight between Buffy and Black Widow. Not-So-Spoiler Alert: Buffy wins. Whedon’s unsurprising soft-spot for his signature character will shape his development of Black Widow later on.

Immediately following the release of Age of Ultron, fan backlash against Whedon for his handling of female characters made headlines, even eliciting speculation that this was what scared him off Twitter. (It wasn’t.) I’m not here to curse him out or wish him death as others have, but to get to the root of how Whedon’s dependance on his familiar Strong-Female archetype — and one that may not even be that strong — actually weakened Natasha Romanoff’s character arc.

Yes, the Buffy-ization of Romanoff worked in the first Avengers movie to give some semblance of personality that was missing from her MCU debut in Iron Man 2. Whedon applying Buffy’s technique of using perceived feminine vulnerability as a tactical advantage actually made Black Widow’s Avengers introductory scene one of the the film’s most memorable. However, his continuing portrayal of Widow in Age of Ultron ignores the fundamental building blocks of her personality that were previously established in both his first Avengers and the Russo brothers’ Captain America 2: Winter Soldier — the same building blocks that cause Natasha to seek redemption at the same turning points where Buffy might seek to rebel.

While Black Widow and Buffy may be superficially similar, these aspects diverge upon closer inspection to the extent where leading Widow down the same path Buffy may have taken no longer makes sense.

Both women were torn from experiencing a “normal” teenaged life in service of becoming warriors, but only Natasha went through the trauma of the Black Widow Program and spent her formative years adding “red to her ledger.” As a result, Natasha’s primary motivation throughout the first Avengers and Winter Soldier is to pay penance for the horrors she’d committed. In contrast, Buffy spent her formative years righteously killing demons and not feeling sorry for it one bit. Slaying was a chore to her — an extracurricular activity, where she had the support and aid of an entire team of Scoobies. She feels so blasé about dispatching her soulless victims, that she even sings about how bored she is by Slayer-dom in the infamous musical. 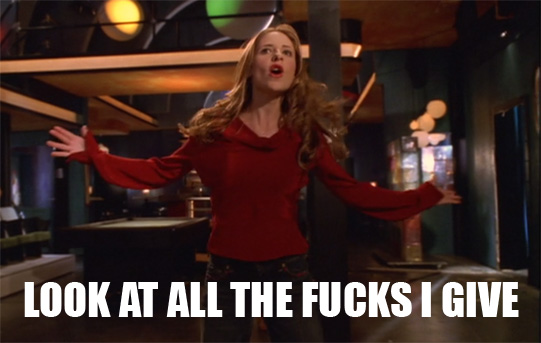 While both Natasha and Buffy also had paternalistic mentor figures guiding them early on in their superheroine careers, the underlying dynamic between their relationships couldn’t be more different. Black Widow becoming an Avenger was a choice that led her to seek affirmation from her guiding figures, Nick Fury and Hawkeye. Their assurance that she was doing the right thing is Romanoff’s moral touchstone, when she spent much of her early life doing the complete opposite. The importance Romanoff places on their acceptance is why she felt disappointed and betrayed that Fury didn’t trust her enough to let her in on his death-faking scheme in Winter Soldier.

On the other hand, Buffy becoming a Slayer was a mandatory duty pre-packaged with Giles’ role as Watcher to rein her in and keep her on track. Naturally there is some desire for Giles’ approval, but their relationship also bristled under Buffy’s initial reluctance to accept the weight of her role. Unlike Natasha, Buffy never felt the need to prove her “goodness” or worthiness to Giles. It was Buffy’s birthright as the Chosen One to take “goodness” for granted, when this is everything that Black Widow strives for.

As you can see, this Redemption vs. Rebellion theme comes into play with our heroines time and again, and the importance of Redemption is firmly established for Black Widow in at least two of her prior films. Is it any wonder then, that Whedon’s Age of Ultron portrayal felt more like cramming a square peg into a Buffy-shaped hole? Nowhere is this more obvious than in the out-of-the-blue introduction of Romanoff’s romance with Bruce Banner/The Hulk.

It’s not shocking that the Widow/Hulk romance in Age of Ultron gave some fans flashbacks of Buffy and Angel. We get it; Whedon is in love with the idea of the heroine-with-a-monstrous-side falling for a conflicted-sensitive-guy who is also trying to fight the monster within.

But what is it about Natasha Romanoff’s history and personality that would make it realistic for her to proposition Banner into running away with her from all of her ledger-wiping responsibilities so they can be monsters together? Everything she has been doing in the MCU thus far has been about her making the choice to run towards responsibility so that she can become less of a monster.

In Buffy’s case, being so close to monsters (particularly sexy vampires) and the fact that she literally has a Shadow Demon inside of her (which is what gives her superpowers in the first place), the urge to give into darkness is realistic. Buffy wanting to become a little bit of a monster inside by having flings with vampires and running away from the burden of being the Chosen One absolutely makes sense for her character arc. When Spike tells Buffy in “Fool for Love” that all Slayers had a death wish that led to their eventual demise, it calls back to this exact flirtation with darkness.

Black Widow has a death wish too, but it’s one driven by contrition and self-sacrifice rather than desire and self-destructiveness. This comes into play in Winter Soldier when Romanoff dumps all of S.H.I.E.L.D/HYDRA’s secrets online, including intimate details about her own sordid past. Here, she has essentially sacrificed several lives and identities that she’d created and had been living under to prove to herself and her team that she is worthy of being a heroine. One of the few times this Natasha Romanoff is shown in Age of Ultron is when she’s standing by Captain America’s side as Sokovia was on the edge of destruction, suggesting that they all go down with the ship.

Natasha Romanoff, since joining S.H.I.E.L.D, has been trying to prove to herself and her friends she’s not the monster she’d been twisted into by running towards responsibility and self-sacrifice in order to wipe the red from her ledger. Buffy Summers, since becoming a Slayer, sacrificed so much of herself under the burden of immense responsibility to her friends/family, that she desires escape — be it into the arms of some monster, or even to Heaven.

This is why modeling Black Widow’s arc after a Buffy Boilerplate was so incredibly out of character and why this one-size-fits-all writing struck all the wrong chords with many fans. While it’s wonderful to see more female characters deal with the burdens of power and responsibility – development usually reserved for their male counterparts – it does a disservice to the nuance in different kinds of women with different kinds of backgrounds and motivations to presume they’d all react the same ways under pressure.

As witty and engaging as Whedon’s heroines can be, true representation encompasses more than a monolithic take on superheroines. Isn’t it about time that there was more than one way to be a kickass woman warrior?

Alice Meichi Li is an illustrator working primarily in the comics industry and pop-culture gallery scene. You can check out her art @ http://alicemeichi.com/ As a queer woman of color, she is passionate about and be found speaking on various panels about social justice issues. Sometimes she writes about nerdy stuff, too. Find her on her website, Twitter, Tumblr, or Facebook.