Would You Eat A Salami Made Of 40% Kanye West?

No disrespect to non-human salami. 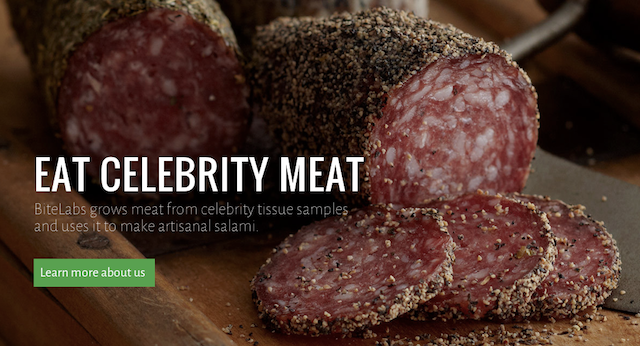 Soon it may be literally possible to eat the rich. Although at first glance Bitelabs might seem like any internet startup, they’re not just your typical group of Silicon Valley biotech gourmands. In their own words, Bitelabs wants to “mix celebrity and animal meats into curated salami blends.”

Bitelabs’ website has been up for about a month now, but their promotional campaign didn’t begin in earnest until this Tuesday. Although their proposal to use the “biopsied myoblast cells” cultivated from A-list celebrities to “grow our healthy, rich, meats in[…]bioreactors” sounds too bizarre to be real, if the company is just a hoax, then whoever is masterminding it is remarkably committed.

The website encourages consumers interested in enjoying a part-celebrity salami to tweet #EatCelebrityMeat to one of Bitelabs’ “big four”–Kanye West, Jennifer Lawrence, James Franco and Ellen Degeneres–and ask them to submit to a biopsy for the cause.

In an e-mail conversation with Motherboard, “Kevin,” an operator from the site, describes what’s involved in Bitelabs’ social media campaign.

As for the response, all I can say is that twitter is blowing up, and we’ve been blown away.  We estimate BiteLabs has been tweeted about over 3000 times in the past 24 hours, and our site has gotten some 100,000 views at the time of this writing. I believe Jennifer Lawrence and James Franco are pretty neck and neck in terms of who has been tweeted at the most.

Alarmingly, Kevin claims that BiteLabs has already received volunteers for biopsies, just not from their targeted “big 4.”

The disconcerting notion that actual people volunteered to have their cells mixed with hungarian paprika and worcestershire sauce (as is the case with the Kanye Salami) may be the entire reason Bitelabs exists–not as a biotech, but an art piece staging an intervention in the cult of celebrity.

Despite “Kevin’s” overwhelming sincerity and secrecy, it seems most likely that Bitelabs is just a semi-sufferable art project from someone who read A Modest Proposal one time too many times in Lit Class. We’re willing to figuratively cannibalize high-profile figures’ lives for our entertainment, it seems to ask, but are we willing to cannibalize their flesh as well? Deep, man. Very deep.

Motherboard”s Brian Merchant suggests that if Bitelabs is indeed just a prank, a group like PETA could also be responsible. That’s a valid theory since debate over consuming lab-grown human meat naturally leads to discussion around bioethics and meat consumption in general. Plus this disgusting picture on Bitelab’s website would be enough to make the most carnivorous of us pause. 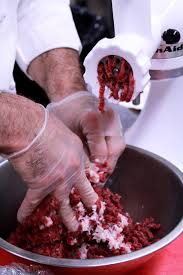 Kevin doesn’t confirm or deny Motherboard’s suspicions that the startup is making a point and not actually hawking celbritilamis, saying

BiteLabs is 100% serious in prompting widespread discussion about bioethics, lab-grown meats, and celebrity culture – this is very important to us. We also think that prompting the cultural discussion around lab-grown meats and popular culture will acclimate people to the field.

BiteLabs, if you’re just a hoax, points for commitment I guess. Maybe one day a serious A-lister will call your bluff, and you’ll reveal whether you actually have the technology to bring us a Salami Lee Jones or a Meathew Broderick. In the meantime, good job on being so gross.

(via io9 and Motherboard, images via Bitelabs)