Baby Birds Blackmail Parents Into Feeding Them | The Mary Sue

These Little Birds Squawk to Attract Predators, Blackmail Their Parents for Food 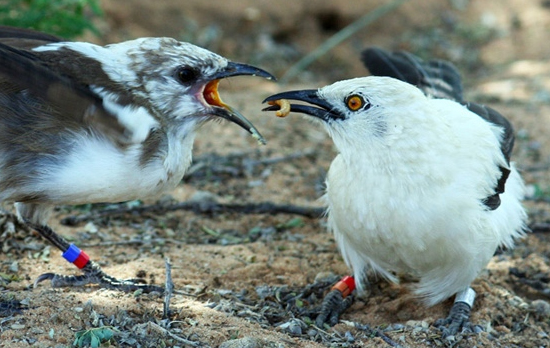 As was pointed out in The Walking Dead, a zombie apocalypse a hungry, crying baby is likely going to attract the undead and put everyone in serious danger. Similarly — though in less apocalyptic circumstance — the loud squawks of a hungry young pied babbler can blackmail the baby bird’s parents into feeding it pronto, before predators also hear their cries. This will be a scenario familiar to anyone who has been exposed to the phenomenon of ‘Italian guilt’ in their lifetime: “Hey, if you don’t come feed me quick, I guess maybe you want predators to eat me. No, it’s fine. I guess you can always have more babies.”

To confirm that nature produces little feathered brats of this sort, Alex Thompson of the University of Cape Town, along with British and Australian colleagues, took bird watching to an extreme. Clocking in more than 200 hours over three years, they studied the Southern pied babbler in the Kalahari Desert in South Africa and observed more than 3,000 occasions of parent pied babblers feeding their young.

On average, the fledglings were fed 0.12 grams of food per minute when squawking from the ground, in plain view of predators, as opposed to 0.03 grams per minute when whining from the trees. To push the buttons on this child-parent guilt trip experiment, Thompson’s team played audio recordings of the alarm calls made when ground predators have actually been detected. The parents freaked out and shushed up their ground-dwelling kids with more than twice the standard amount of food, while fledglings perched in the safety of the trees got no such treatment.

Basically, the young babblers intentionally put themselves at risk to force their parents to pay attention to them and get them some grub. The study, published in the Proceedings of the Royal Society, showed that the fledglings would move from the trees to the ground when driven by hunger. Showing a hint of skepticism, evolutionary biologist Rufus Johnstone at the University of Cambridge said:

“Most studies on begging focus on nestlings, so it’s very interesting to see a study on the more mobile fledglings. The question I come away with is whether it’s possible to distinguish between blackmail and honest signalling of hunger.”

While avian ecologist László Garamszegi at the Doñana Biological Station in Spain said:

“This study begs for further research. It is bewildering that the fledglings move into such a risky position. A fledgling risks not only its own life but also the lives of its parents and their potential to create offspring with many of its own genes. Given the costs, it seems like it would be better for parents to sacrifice the life of an offspring.”

Admitting that they can’t draw any true parallels between bird and human behavior — presumably because we haven’t yet reached a zombie apocalypse — Thompson cited what he finds to be a more realistic comparison. He said:

“I know from personal experience that parents are more willing to buy kids sweets or treats if they start screaming in a public place. It isn’t a predation risk, but it is an embarrassment risk.”

Which means that Thompson’s human fledglings totally embarrassed him in a mall or something at least once.