Birds Respond Emotionally to Music Just as Humans Do 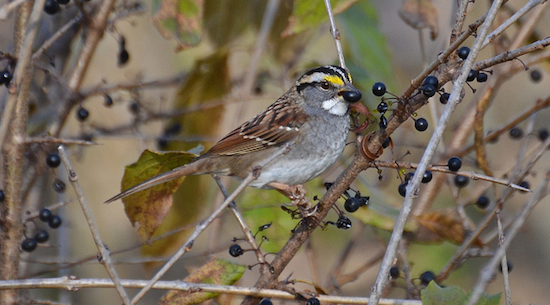 Scientists have long debated the topic of whether or not the melodious chirping that constitutes birdsong qualifies as music. But the results of a study conducted by then Emory University undergraduate Sarah Earp and neuroscientist Donna Maney have shown that birds, namely the monitored behavior of the white-throated sparrows used in the analysis, exhibit similar neural activity that humans do when listening to music that is either acoustically pleasurable or a discordant mess that pains the ear drums — such as listening to Björk. Not only does this mean we share a mutual admiration for the musical arts with our feathered friends, but also that scientific discoveries are gradually turning our world into a wonderful fantasy land seen only in animated Disney movies.

In Earp and Maney’s study, these positive and negative reactions to birdsong stimulus were monitored through the measurement of Erg-1: A biochemical pathway that is activated within cells upon reacting to a form of stimulus. Two different groups of sparrows were used in the study, with one being given increased levels of hormones to get them in the mood, or more appropriately, the “breeding state.”

The two found that the female sparrows, during the breeding state, experienced an activation of their mesolimbic reward pathway listening to the birdsong of courting males, every bit as similar to when we listen to music that gratifies our own pathway. While females hear what is tantamount to Freddie Mercury whispering sweet nothings in their tiny ear canals, other males have an averse neural response to the singing of their randy compatriots, as if Nickelback were blasting from a stereo nonstop. In addition, males sing with other males as a means of claiming territory or challenging the authority of another. To put it in perspective, it’s kind of like watching the musical dramatics of an opera.

The control group not treated with the hormones displayed a completely different reaction when not in the breeding state. During these times, males and females engage in birdsong to both establish and maintain dominance, which makes one wonder if their little relationships are on the rocks.

On these findings, Earp stated:

The neural response to birdsong appears to depend on social context, which can be the case with humans as well. Both birdsong and music elicit responses not only in brain regions associated directly with reward, but also in interconnected regions that are thought to regulate emotion. That suggests that they both may activate evolutionarily ancient mechanisms that are necessary for reproduction and survival.

Now if Earp and Maney can find a way for us humans to tell birds not to use our car windshields like a toilet via the language of birdsong, then maybe we’d have a more cordial relationship with our avian allies.