BioShock Infinite: It’s In the Sky 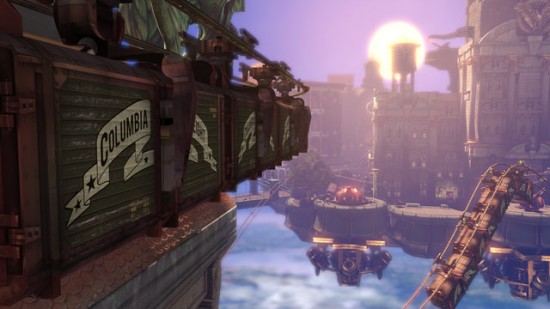 Get prepared to hear this a lot about BioShock Infinite, the just-announced BioShock sequel: It’s in the sky. (Guess that Project Icarus codename meant something.) We thought we were wonderfully clever when we heard that the game wouldn’t take place in the underwater city of Rapture like BioShock and BioShock 2 but rather in “an immense city in the sky” called Columbia, and immediately came up with: “LOL, they should call it Skyoshock.” Then, alas, we took to Twitter and discovered that many other people shared our humorous turn of phrase, as well as “Flyoshock.”

So: BioShock Infinite is in the sky. Glad we got that out of the way. What else do we know about it?

We don’t know what month, though.

You’re going to see these three screenshots a lot:

The two below plus the one above, because that’s what was in the press release. Also, the logo, if you’re lucky. 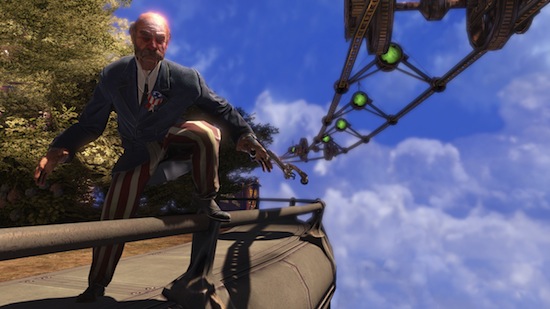 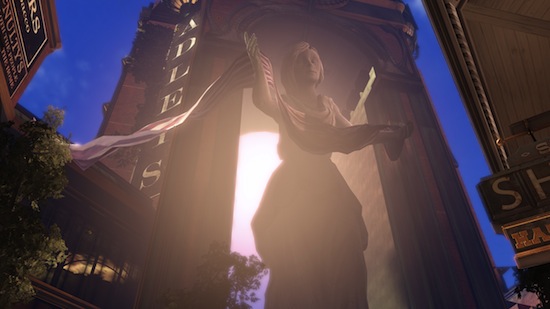 “The player assumes the role of former Pinkerton agent Booker DeWitt, sent to the lost city to rescue Elizabeth, a young woman imprisoned there since childhood. He develops a relationship with Elizabeth, augmenting his abilities with hers so the pair may escape from a city that is literally falling from the sky. DeWitt must learn to fight foes in high-speed Sky-Line battles, engage in combat both indoors and amongst the clouds, and harness the power of dozens of new weapons and abilities.”

Irrational Games is back:

Now we’re getting somewhere. Whereas BioShock 2 saw Irrational Games, the developer of 2007’s BioShock, pass the torch along to 2K Marin, BioShock Infinite was announced as a collaboration between the two. (Irrational Games is owned by 2K Games parent company Take-Two Interactive, so both of these subsidiaries are working under the same banner.) The release promises that Irrational will “lend their meticulous attention to detail and unique storytelling expertise” to BioShock Infinite; this could be welcome news to the gamers who thought that BioShock 2 was treading water.

This could be the biggest tangible difference as gamers experience the game: Whereas BioShock, for all of its water and philosophy, was a dark corridor shooter like dark corridor shooters before it, sky-city Columbia could lend itself to more open gameplay. MTV Multiplayer:

“The first “BioShock” was extremely claustrophobic, with tight corridors and passageways. Columbia isn’t Rapture. Its wide streets and expansive vistas allow much more maneuverability in combat. In one sequence, the player used a rail system to dodge the incoming attacks of a mortar cannon being fired a quarter-mile away. That rail system isn’t just a means of going from point A to point B, it’s used throughout the game as an option for combat, moving from one floating city block to another to get the jump on your opponent.”

Check out BioShock Infinite’s first teaser trailer below, and let us know your thoughts.