Why Is Icarus So Hot Right Now? 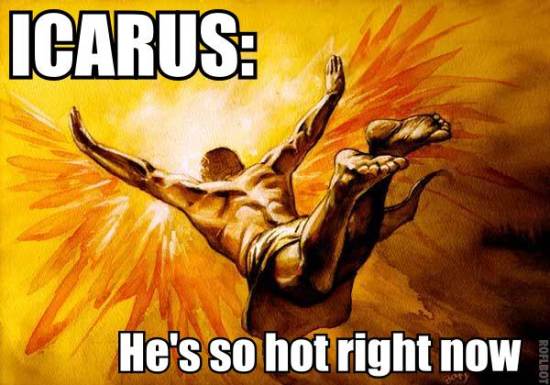 For some reason, Icarus is heating up right now in the video game world, and the sun doesn’t seem to have anything to do with it, except if you consider that it supports human life and humans make video games. But that’s a minor point. What’s important here is that Icarus has apparently become the go-to metaphor for trying to achieve perfection but finding your downfall. Or, sometimes, it’s not even a metaphor at all. And sometimes it’s just a cool word to throw into your game title. But whatever the reason, one thing is certain: Icarus is so hot right now. (Other certain thing: I love that joke way too much.)

Perhaps the most mainstream recent use of Icarus was not in a video game but in a film, Die Another Day. This particular use was not quite a metaphor. Really, the baddie was just creating another sun, but weaponized. DOUBLE SUN POWER! While I can’t claim with any certainty that this launched the Icarus movement, it’s a believable inspiration for the word to enter geek culture in a bunch of new ways. For instance, there’s Japan’s IKAROS project, which is about a kite accelerated by the radiation of the sun. Now that is how you use the name Icarus right, though spelling it correctly too would’ve been even better. These video games don’t use it quite so well, sadly. But some come close. And, in no particular order, they are:

Just a warning, there are spoilers here. Anyway, in the later chapters of the game, our protagonist Faith realizes just what the government has been cooking up in its covert spare time: Project Icarus! In project Icarus, normal soldiers are trained in the runner’s arts, making them basically ninja soldiers. So, why Icarus? No obvious reason. Here’s somewhat of a stretch, but the only reasonable explanation courtesy of the Mirror’s Edge wiki: “Project Icarus was most likely named such because the Pursuit Cops trying to take down the runners is an analogy to Icarus having his wings melted down, however there is no actual real explanation as to why it is named Icarus.” You know my explanation? Icarus sounds awesome, and Mirror’s Edge is all about awesome.

The most exciting upcoming title, perhaps because it is the most previewed, has to be Kid Icarus: Uprising. So how does this one get away with using the mythological name in question? Well, it’s about Pit, a young angel. But, he always had the wings, and nothing happens to do with the sun. So we’re looking at another loose connection. Though in the original Kid Icarus game, full completion could lead to the transformation into a teenager. Except in the game it’s a good thing. For Icarus, losing his wings is considered somewhat of a negative.

Where to begin. Well, first, in previous installments there was an artificial intelligence named Icarus. But more pertinent to the present, we have multiple Icarus allusions coming up for the latest game. First, watch this trailer. Did you see it? Yeah, it’s none too subtle. Now guess what the name of the song in the background of that trailer was. Have you guessed it? It’s called “Icarus,” and it’s by Michael McCann. But wait, there’s more: The title for the book to accompany the new game is called The Icarus Effect. Now I’m understandably excited as flip about this game, so maybe that’s having an impact on my judgment, but this could be a great use of the Icarus figure. We modify humans to become fighting machines, but at what cost?

Well, here’s a game you can play on your computer right now. It’s kind of a cool idea for a game: A mid-air, ship shooter game where you actually control a human being, not just the ship itself. But still, how is this Icarus? I hate to be the bearer of bad news, but being in the sky does not make you Icarus. In this case, it seems to just mean you own a blimp tethered to a boat. Now, I guess you could make the argument that your blimp could get blown up, sending you plummeting to the ground. But that’s not because you got too close to the sun, it’s because you got shot. And that sucks for everyone, not just specific figures of Greek mythology.

And now, Project Icarus … whatever that is

Bioshock creator Ken Levine is making a game called Project Icarus. We know it will be a first-person shooter. We also know that it has a teaser website, if you can call it that just yet. Whatever it is, I’m going to guess it’s not the last we’ll be seeing of Icarus allusions in games. But this one comes from a game creator I trust, so I assume it will be well-used here.

So we have games in the past, present, and future all using the name Icarus with varying levels of legitimacy. Is it overkill? Not just yet, but if games start to use his name in vain, they’re going to get burned by the critics.

And as always, if I missed any MAJOR Icarus mentions in modern gaming, let me know in the comments.