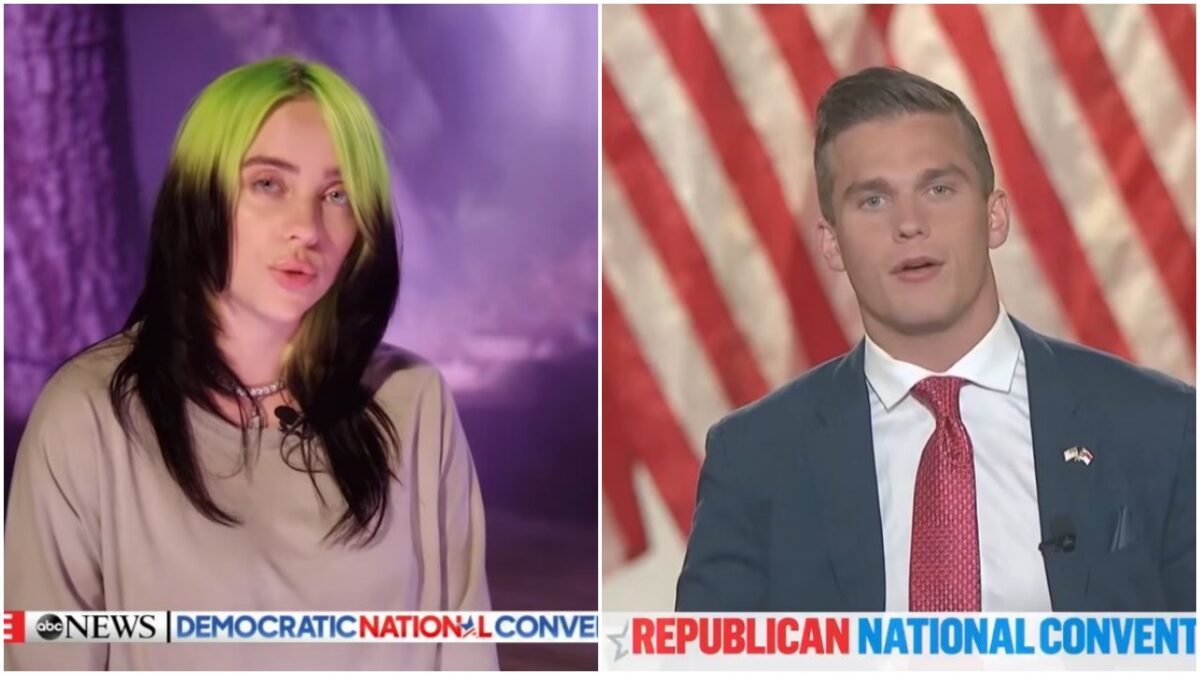 A major Fox News talking point has always been the fabled culture war, which they claim is threatening to tear America apart. We’ve seen it in the annual “war on Christmas” fear-mongering, the pearl-clutching over Colin Kaepernick’s kneeling, and the network’s historically anti-LGBTQ content. It’s a simple strategy that has largely been adopted by the Republican party and summed up in Donald Trump’s infamous slogan “Make America Great Again”. And it’s the backbone of every anti-progressive push to keep the rich folks wealthy and the straight, cis white men in control of the country.

After all, who else will defend America from the brown bisexual baby-killing gun-taking vegan gender-fluid immigrant horde threatening our way of life?

Which brings us to this tweet from David Nicholas, a pundit who regularly appears on Fox Business:

Right: @CawthornforNC, candidate for US Congress, speaking at @GOP convention / paralyzed from the waist down, but still stood in respect of the American flag

Which individual do want influencing the next generation? pic.twitter.com/s98cdsI7r8

Eric Trump made a similar tweet comparing the two:

Biden Convention vs. Trump Convention! You choose… I STAND with @madisoncawthorn and with America 🇺🇸🇺🇸🇺🇸 pic.twitter.com/Sjv6HjSo1w

The comparison feels arbitrary: one is a musician, the other is a politician. The only point they seem to intersect on is their youth. But the point he is trying to make is clear: this little pop star girl with green hair is a bad influence on the youth, as opposed to this clean-cut young man in a suit and tie. It’s a comparison that reeks of misogyny, and of the way that Republicans like Nicholas seek to belittle and brush off women’s and artist’s voices in political discourse. It’s rich coming from the same RNC that touts right-wing celebs like Kid Rock and Scott Baio, while insulting the DNC line-up of “liberal elites” like Eva Longoria.

But let’s take a closer look at Madison Cawthorn, the 25-year old candidate who hopes be the Republican answer to The Squad. On the surface, he’s an American success story: a man who overcame a tragic car accident which left him paralyzed, but picked himself up by his bootstraps to become a successful real estate investor.

But his financial success is specious, he has called the Black Lives Matter movement “hijacked by Marxists”, and he lied about being recruited by the Naval Academy. He’s against trans rights. He called the New York Times’s 1619 Project the “Project 1692,” because “it’s more like the Salem witch trials.”

He is also dogged by links to white supremacy, nazism, and the harassment of women.

In contrast, Billie Eilish is a 19-year old award-winning musician with an opinion.

Many people called out the obvious sexism and arbitrary comparison:

You must have missed the part where double amputee and Purple Heart recipient, @TammyforIL, stood up denouncing everything you and your dad stand for. Here’s a screenshot to jog your memory. #Vets4Biden #CowardInChief pic.twitter.com/yFpV9tNT4g

We prefer Congressional candidates who know that James Madison didn’t sign the Declaration of Independence. But, why let facts stand in the way of a good story? pic.twitter.com/rIJCtY0zbo

Billie Ellish’s pic here is used as the stand in for social influencers. They aren’t as powerless as believed, and that makes the Trumps upset.

Hi David. I have to go with the unique and creative young artist over the wannabe nazi dork.

yeah i’m usually gonna take my cues from someone who doesn’t have to be defended when people discover pics of me idolizing the leader of the nazis pic.twitter.com/XGSCebR0o1

Biden convention vs Trump convention! You choose… I stand with the brave #BraydonHarrington pic.twitter.com/b5sf1mzWyO

Editor’s Note: This article originally stated that Nicholas was a Fox News anchor and Fox Business anchor. It has been updated to clarify that he is not, but is a pundit who frequently appears on Fox Business.