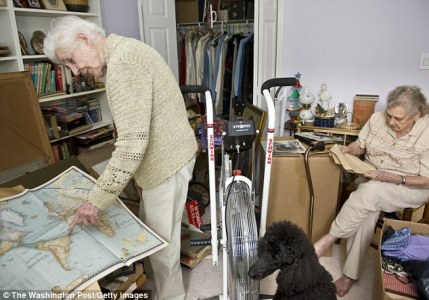 File this under “Kickass Ladies and Their Adorable Stories.” Betty McIntosh, 96, and Doris Boher, 88, are best friends. And, in a story just waiting to be turned into a sitcom, they both spent their youths as secret agents for the U.S. during World War II. But they didn’t even meet until well after retirement.

Both part of a small group of women who worked for America’s first intelligence agency, the Office of Strategic Services, the two never met during their tenure there–or, later, when they both went to work for the CIA.

It was only when they moved into Lake Ridge seniors’ village a few years ago–which a mutual CIA friend had recommended. Now inseparable, they call each other every morning to check in on each others’ health, and to recount stories from the old days.

Two of very few female spies at the time, Bohrer describes the male-dominated atmosphere, particularly a scene in which a group of male colleagues were mocking her, provoking her to drop a disabled grenade on their table, causing them to flee in terror. Oh, to be a fly on the wall of their conversations.

To read more about their time in the OSS and their friendship, go here.