Could There Be a Worse Education Secretary Than Betsy DeVos? | The Mary Sue

Could Anyone Possibly Be a Worse Choice For Education Secretary Than Betsy DeVos?

No, really. Literally anyone? 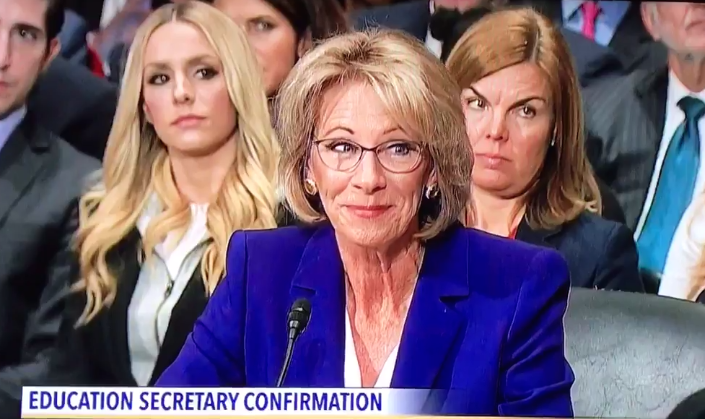 Remember last week, when we were talking about the good news/horrible news of the confirmation hearings for Trump’s cabinet nominees, and I said that at the very least, it looked like Trump might be beginning to surround himself with people who—even if they are evil and/or opportunism incarnate—were, in some cases, at least mildly knowledgable (more so than Trump, that’s for sure) and will be able to disagree with and, hopefully, guide Trump?

Ah, what simpler times those were.

If you’ve been following the hearings, you’ve most likely been realizing that these cabinet picks are, nearly across the board, shockingly ill-fitted for their proposed jobs. Trump’s Attorney General pick, Jeff Sessions, (in addition to being just wholly awful) hadn’t even talked to Trump yet about Russia. Scott Pruitt, the pick to head the Environmental Protection Agency, doesn’t believe seas levels are rising. The new proposed U.N. Ambassador, Nikki Haley, most definitely hasn’t even read the Iran deal. Ben Carson, a brain surgeon, is so unqualified for his role as the head of the Department of Housing and Urban Development that Trump is bringing in comedian Steve Harvey (seriously) to help him.

But we may have a new winner for worst nomination yet. Meet Betsy DeVos, the proposed Education Secretary. DeVos is a billionaire (her husband is heir to Amway) whose views of the education system seem to be heavily grounded in a desire to privatize education. She’s a huge supporter of the school voucher program, to the point that the New York Times said it’s “hard to find anyone more passionate about the idea of steering public dollars away from traditional public schools than Betsy DeVos.”

But all of that makes it sound like even if her ideas are controversial (read: terrible), she at least has some basic understanding of what her job might be as Education Secretary. She doesn’t. Here’s what we learned about DeVos during her three hour confirmation hearing. (By contrast, other nominees’ hearings lasted multiple days.)

She doesn’t know the difference between proficiency and growth, a basic tenet in the debates and discussions of the American education system. Al Franken tore her to shreds on this.

She doesn’t know what the Individuals With Disabilities Education Act is. (Or, in her words, she “may have confused it.” With what, no one knows.) But when pushed, she says that she thinks the states should be allowed to decide how they spend federal funding. Tim Kaine asked her, “So some states might be good to kids with disabilities and other states might not be so good and, what then, people can just move around the country if they don’t like how kids are being treated?”

Her response? “I think that’s an issue that’s best left to the states.”

You definitely want to watch Kaine eviscerate her.

As you can see in that video, “best left to the states” is pretty much her mantra. Which makes sense. DeVos’ family is one of the wealthiest in Michigan. She’s one of those people that would get to move to a state where her needs and values were fully met. She’s a huge proponent of “school choice” (vouchers, charter schools, private schools, etc), and given everything she said to Kaine, it’s hard to think she has any interest at all in public schools, or the nationwide education system in general. “Best left to the states” seems to mean “If I don’t want to pay attention to it, I don’t want to be forced to.”

Sen. Elizabeth Warren finds Betsy DeVos has no experience managing student loan programs, never took out a loan & never had a child who did. pic.twitter.com/nuhGMYAebm

Which is maybe why the best she can do by way of answer to Bernie Sanders’ question on tuition-free public colleges and universities is a bland cliché.

“There’s nothing in life that’s truly free—somebody’s going to pay for it.” @BetsyDeVos on Sanders’ “free” tuition idea. pic.twitter.com/TYOkmzRNAc

If all of this makes you terrified for the future of our country, well, it should. And not that this is any less terrifying, but I have, at least, saved the best for last. When it comes to guns in schools, DeVos thinks that’s an issue—say it with me now—best left to the states. But ultimately, she’s in favor of guns in schools BECAUSE OF BEARS.

Betsy DeVos wants to allow guns in schools because there might be bears #DumpDeVos pic.twitter.com/5vEFhZR64W