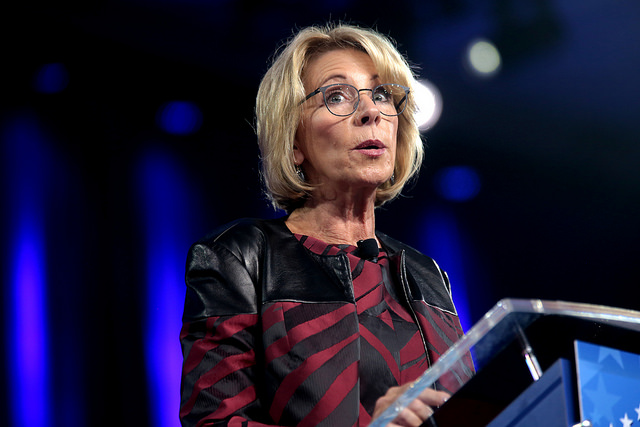 Another day, another laughably (if it weren’t so upsetting, that is) ignorant statement from Betsy DeVos.

What does our new education secretary have for us today? She released a statement in which she called Historically Black Colleges and Universities “the real pioneers when it comes to school choice.” According to DeVos, these colleges, which were borne of segregation and discrimination, “are living proof that when more options are provided to students, they are afforded greater access and greater quality. Their success has shown that more options help students flourish.”

Again, HBCUs were established as a response to Jim Crow laws following the Civil War. They came from Black students literally having no choice.

Making this statement even more tone-deaf is that it is labeled as “following a listening session with HBCU leaders.” It feels like maybe “listening” isn’t DeVos’ strong suit.

She has since walked the statement back on Twitter, saying,

Providing an alternative option to students denied the right to attend a quality school is the legacy of #HBCUs. But your history was born not out of mere choice, but out of necessity, in the face of racism, and in the aftermath of the Civil War. #HBCUs remain at the forefront of opening doors that had previously been closed to so many.

That only came after some intense criticism and a thorough dragging online.

What we learned today: Betsy DeVos knows as much about HBCUs as she does about _anything else_ related to the job she holds. pic.twitter.com/ES5EkRiKdV

To paint historically black colleges as pioneers of “school choice” is like saying the Montgomery bus boycott was a transportation startup. https://t.co/DRic6txMU1

Next Betsy DeVos will praise slaves for being “entrepreneurial self starters”

Betsy DeVos said HBCUs were about school choice. As if white/colored water fountains were about beverage options. pic.twitter.com/I3tNlER43n

The upsetting part of this that doesn’t get washed away with that not-actually-an-apology up there is that this isn’t surprising in the slightest. This sort of statement represents so much of what we’ve heard from DeVos on a range of subjects. Of course she would see the great good in HBCUs and chalk it up to being an endorsement of their roots.

DeVos has spoken against a number of federal laws and mandates meant to protect potentially marginalized groups of students, as with the Individuals with Disabilities Education Act. She favors charter, private, and religious schools, ignoring public ones. And by storing up examples of times when huge communities were ignored by their governments and still thrived, she has manufactured ammunition at the ready to support her ultra-privileged viewpoints.

She’s using the stories of those who overcame circumstances created by people like herself to support her own actions.