In the 12th century, someone somewhere in Scandinavia carved the Lewis Chessmen, a collection of nearly 100 chess pieces of a particularly unique and expressive style. It wasn’t the first ornate chess set, but it’s certainly a strange and unique set with its shield-biting berzerkers and worried looking royalty. Since the Lewis set, the Western world has continued to make stranger and stranger chess sets. Perhaps this speaks to the power of the game, and it’s captivating metaphorical nature. More likely it speaks to the human desire to spend stupendous amounts of money.

Regardless, chess set making has come to the point where it’s no longer about the game but about whatever weird twist you can put on it. And trust us, they’ve come a long way from simple walrus ivory carvings. So whether your covet these gameboards, or laugh at those that do, please enjoy this humble collection of the least humble chess sets the Internet has to offer.

After besting the xenomorphs four times, there is only one battlefield left for Ripley and the humans in their ongoing struggle: a game of wits. This handsome chess set, featuring the creatures and characters from the 1986 sci-fi classic Aliens, would be perfect. You can just feel the chest-bursting action unfolding on the board. 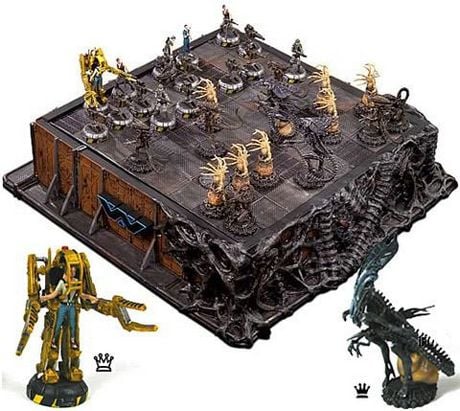 In the same vein, though a bit more disturbing, is artist Alastair Mackie’s arthropod chess. This set, played on a stark white illuminated board, has insects and arachnids suspended in the pieces. Protip: choose a phobic opponent. Etsy seller Monsters Domesticated also plays off themes of the grotesque with this Lovecraftian chess set. The creator describes it thusly: “We consider the black pieces to be the Cthulhoid forces, with dread Cthulhu itself as king, and menacing Dagon as swift and malevolent queen, and the mouldering green pieces to be led by Yog-Sothoth as king, in all its gibbering madness, and primordial Ubbo-Sathla as queen.”

The seller goes on to warn that playing the game will cost you your sanity. No matter who wins, we lose. Only one way we lose has a lot more tentacles.  Sold!

While Lovecraft chess raises the stakes as a fight between elder gods to decide how, exactly, the world will end, Ralph Morse’s set of tactical nuclear weapon chess seems far more sinister. As a stark reminder of the madness underlying the Cold War, his work is humbling and frightening. That doesn’t stop me from wanting it. ICBM to Bishop kaboom.

High-tech chess sets are nothing new, but there’s something delightful about the low-tech nature of a vacuum tube chess set. Created by artist Paul Fryer, the pieces glow when plugged in to the board, with the piece’s symbol on top. Though my experience with vacuum tubes is minimal, I imagine that the pieces could get uncomfortably warm as play goes on. An incentive, perhaps, to keep the game going.

Vintage electronics isn’t the only way you can class-up the game of chess, a set of multi-thousand dollar vibrators works, too. Given the, ah, design of the set, it is surely not for the faint of heart. Nor is it for those of us who, like me, have a 7th grade sense of humor, and would spend the entire game snickering like an idiot. The downside of owning a dildo-chess set is finding someone to play with. Of course, you could probably have lots of fun by yourself.

In the category of “creepy and ludicrously expensive,” you can do no better than the chess set available at Michael Jackson’s estate auction. Covered in gold and other precious metals and on a huge marble board, this is “gaudy” made solid. And I love the huge egg timer, that’s a real splash of class on this otherwise restrained board. The man had talent, not taste.

There are Star Wars LEGO chess sets, and then there are the two made by Brandon Griffith. This set, inspired by The Empire Strikes Back takes place on an icy white Hoth board, and uses not only characters and vehicles but also little vignettes. Darth Vader, for instance, is atop the stairs in Bespin and Yoda has a small piece of Dagobah. LEGO hobbyists, there is no point in building Star Wars chess sets anymore; they’ve already been made perfectly.

Like the Empire Strikes Back follow up, Griffith’s A New Hope set puts all the iconic imagery of the first Star Wars film on the board. Though it hits all the right points, it’s just not as ambitious as the sequel. But frankly, that doesn’t matter when something looks this good.

For those that covet a sonic screwdriver more than a lightsaber, there is the Doctor Who chess set, which pits the Doctor (looks to be Tom Baker, be still my heart) against a slew of daleks and various other b-grade alien enemies. The kicker? It comes with a Tardis-shaped display case for the pieces. The Tardis rooks dematerialize and reappear on a different game board, in the future.

Those Star Wars chess boards were certainly impressive, but what about a robotic chess set that can not only play itself, but does it all with LEGO MindStorms robotics? And what if that chess board was large enough so as to dwarf small children? Folks, I think we’d be looking a recipe for something beautiful. 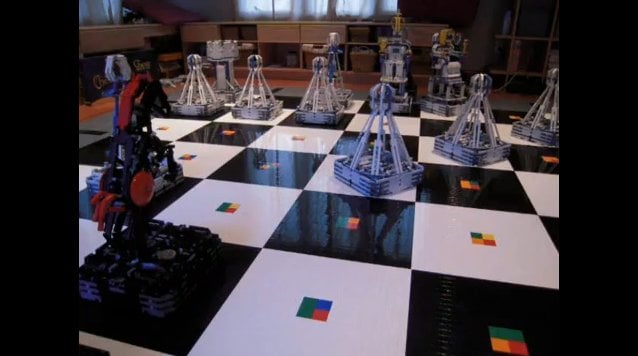 Why Minecraft chess? Because it’s Minecraft, this is Geekosystem, and you’re reading a list of weird chess sets. I think that should adequately explain the situation. This game uses blocks of various elements for the pieces, and the board is 50% flammable. This is vital, since it gives players a fast and easy way to vent their frustration.

Last and probably least is another Star Wars chess set, but this time one that was made for the short-lived Sega CD game system. Instead of gameplay or unique pieces, what sets this game apart is the amazing, over-the-top death scenes the creators decided to include. Have you ever wanted to see the utter tragedy of a lowly stormtropper taking down Luke or Leia? Here, friends, is your chance.