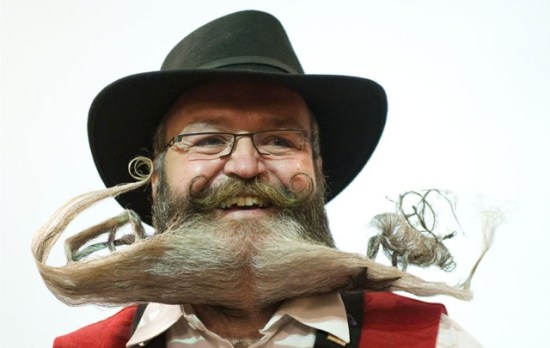 Two-time World Beard and Mustache Championship winner Elmar Weisser has snagged a third victory with his immaculate facial hair. This year, Weisser paid homage to the Norwegian host nation by featuring that country’s flag and a moose, or possibly an elk, in his beard. The 47 year-old German hairdresser managed to beat out 160 other contestants from around the world and says he began working on this masterpiece at 7 A.M. on the morning of the competition.

Though we’ve covered impressive and offbeat beards, as well as their destruction, none of these can hold a candle to Weisser’s ingenuity and artistry.

The win for Weisser shows Europe’s continued lead in the sport of professional bearding, but that may be changing. This year, six U.S. beards walked away with gold medals, and next year’s competition in Pennsylvania could give Americans the chance to establish themselves as serious bearders. We simply cannot wait for the beards of 2012.