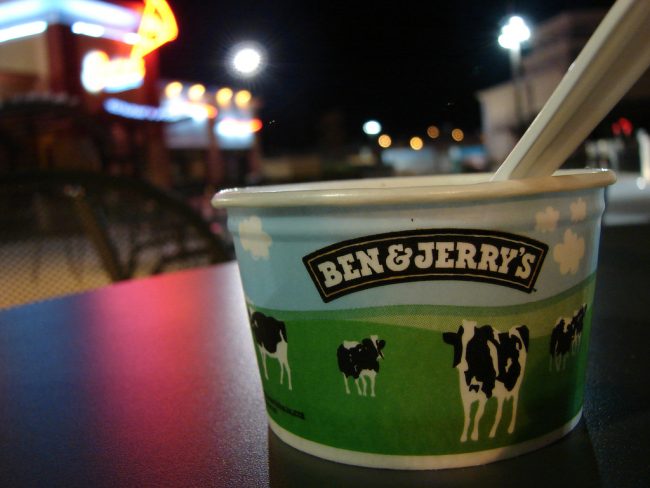 Ben & Jerry’s ice cream has made a name for itself as a relatively progressive company that, in their own words, “aims to create linked prosperity for everyone that’s connected to our business.” From Fairtrade ingredient sourcing to carbon offset programs, from ice-cream-based protests against homophobic governments to the We Dough, We Dough flavor celebrating marriage equality, they’ve incorporated social justice into a lot of their practices.

Two years ago, Ben & Jerry’s signed on to participate in the Milk with Dignity program, a campaign which “call[s] on major food corporations to take responsibility for farmworker rights abuses in their supply chains.” Farms participating in the program agree to abide by a Milk with Dignity Code of Conduct, which guarantees their workers the rights to decent working conditions, housing, and dialogue with the farms that employee them.

However, two years after their announcement, Ben & Jerry’s still hasn’t agreed to terms. “We’ve been negotiating in good faith,” said Will Lambek, a representative of Migrant Justice who spoke to The Washington Post. “It’s an unacceptable delay.” To bring attention to the delay, farmworkers marched to Ben & Jerry’s Waterbury, VT factory yesterday.

According to the Washington Post, Ben & Jerry’s gets about 85% of the milk for their North American products from dairy farms in Vermont. This makes them a sizeable player in the Vermont dairy scene, and it means that their policies – fair or otherwise – could have a large impact on the industry’s practices. It’s important that they do better.

I know this post might seem a little off-brand – but here at TMS, we’ve given Ben & Jerry’s their fair share of good press, because we were excited by their advocacy or amused by their new flavors. (And I’m still a big fan of a lot of their practices.) So I wanted to ensure that we also point out when they’re falling short.

Give the people what they want, Ben & Jerrys: delicious ice cream, clever flavors, and decent working conditions for everybody in your supply chain.