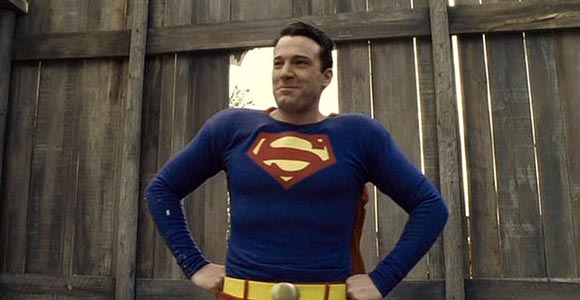 The geek world was rocked last night when a story broke that Ben Affleck might be directing Warner Bros.’ Justice League film project. My first reaction when I saw the news? “Stop it.” I’m not sure why I had that reaction, perhaps Affleck’s Daredevil turn still lingers in the recesses of my mind, but whatever the reason, I was automatically against it. So, is this actually happening and what will you do if it does?

Affleck isn’t just an actor known for doing some questionable movies (*cough*Jersey Girl*cough), he’s also a director. He worked on 2007’s Gone Baby Gone, and The Town in 2010, which had good reviews. He’s also finished up another project called Argo and has been looking into directing Stephen King’s The Stand. But is he up to sitting in the big chair for a huge superhero film? He was in talks to direct Man of Steel which we know eventually went to Zack Snyder.

Variety reported that Affleck was offered the job and that he was the first director to see Will Beall’s script. In June, Warner Bros. announced that they were finally re-starting production on the long-awaited film. One month later, Christopher Nolan went on record to say he would not have a hand in the film.

Deadline later wrote they were “calling bullshit” on the Variety story but that could be more about the rivalry between the two Hollywood scoop websites than anything else. They claim they spoke with Affleck’s people days earlier and didn’t run the story because they denied it was happening.

The actor has said in the past he’s done acting in superhero films but nothing about directing them. I’m not entirely thrilled with the idea but I guess I’d give Affleck the benefit of the doubt. But would anyone else?

People have brought up the fact that no one thought Nolan was a good match for Batman when that pairing was originally announced. The difference is, no one I know was completely disgusted by the idea, they just didn’t think he was the right director for the job. Affleck has a lot of talent but he’s also not universally adored. Could you accept him directing a huge property like Justice League?