Beavers Help Geese Reproduce, But Not in a Gross Way 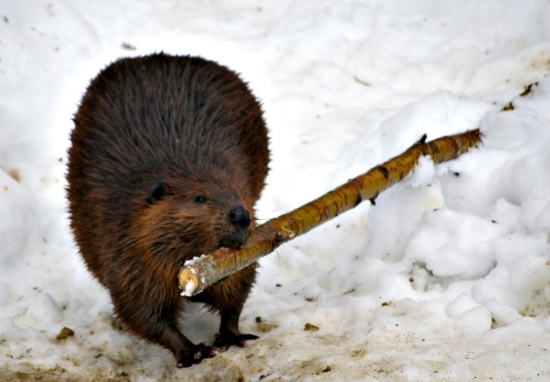 A new study done by a team at the University of Alberta shows that the increased activity around beaver dams helps create conditions more favorable for Canada geese mating. Essentially, the busier beavers are, the busier geese get.

The team was led by associate professor Glynnis Hood, and it looked at data collected at 71 beaver ponds at Miquelon Lake Provincial Park. 32 of the ponds were active, compared to the 39 that were not. The data showed that ice gave way to open water an average of 10.7 days earlier in ponds that were active. The snowpack in active ponds also averaged six centimeters shallower than ponds without beaver activity. It’s believed that the heat produced by the beaver activity is what caused these differences.

Why is that important for geese mating? Geese prefer to mate in warmer, more hospitable places — who doesn’t? Building a nest near an active beaver pond can give geese a jump start on their mating season because they won’t have to wait as long for the ice to melt elsewhere. That can be a big help in the push to raise babies that are able to make the fall migration.

It also helps geese by making it possible to build a nest where land-based predators can’t get them, and because other species benefit from active beaver ponds, there is also ample food available. Hood says that besides geese, animals like coyotes, fox, weasels, moose, deer, ravens, and other birds all benefit from the warmer head start provided by active beaver dams. This backs up earlier research that shows beavers are a keystone species that impact their environment to their own benefit and the benefit of other species.

Keep up the good work, beavers.

(via Phys Org, image via Property#1)