Barnacles Throw Sperm At One Another To Reproduce 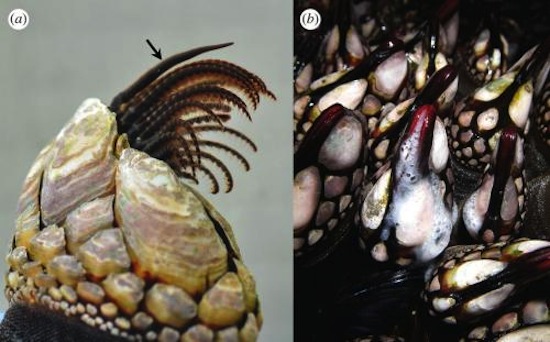 Since they spend their entire lives glued to one spot — be it a rocky shore or the hull of your uncle’s fishing boat — barnacles have had to develop breeding techniques that let them get a little action without leaving the comfort of home. Those techniques, from the hermaphroditism that is common in most barnacle species to the enormous penises — as long as four times the length of their own body — boasted by the creatures have long fascinated researchers studying sex in the animal kingdom. One species of barnacle, though, has just been found to demonstrate a never-before-seen sexual behavior that will have biology students giggling into their textbooks for years to come. The practice, in which barnacles produce sperm and simply fling it into the water hoping for the best, is known as spermcasting, and if it’s found to be widespread in other species, it could rewrite the book on barnacle sex.

Researchers from the University of Alberta wanted to learn how some less well-endowed species of barnacles managed their baby-making, as the long-standing explanation — that as hermaphrodites, they fertilized themselves — didn’t sit well with them. They gathered 37 samples of fertilized gooseneck barnacles (Pollicipes polymerus) and analyzed the DNA of their eggs to find out who the proud parents were.

What they found surprised them. None of the tested barnacles was self-fertilized, with 100 percent of egg specimens showing DNA from two parents. Surprisingly, that was true even for barnacles obtained from isolated areas where no other barnacles penis could have reached to fertilize them directly. The only explanation, researchers say in a study published this week in the journal Proceedings of the Royal Society B, is that the barnacles are spermcasting, a process familiar to males in many corners of the animal kingdom, if not necessarily as a means of breeding. In spermcasting, barnacles produce sperm and then fling it into the water where it is captured by other barnacles and used to fertilize their eggs in what may be the least romantic coupling in the animal kingdom.

If the results are borne out, this new research could offer insight into how other species of barnacle breed, leaving the idea of self-fertilization on the dustbin of history.

(via Proceedings of the Royal Society B)