Sea Slug Leaves Its Penis Behind After Mating, Grows A New One Later 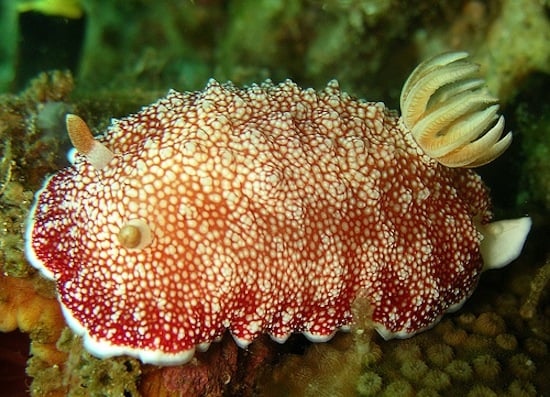 The sea slug chromodoris reticulata might not have a catchy name, but it can do a neat trick never before seen in the animal world. After mating, the hermaphroditic sea slug, which has both male and female sex organs, loses its penis. Don’t fret for it though, as the slug can regrow a new one within 24 hours.

The tiny, red and white slugs, which grow to about the size of a human thumb, lead complicated love lives. As hermaphrodites, each plays both the male and female role during sex, depositing semen in its partner while also being inseminated by it. Researchers studying the slugs, though, noticed that what happened during copulation wasn’t the weirdest part of the slug’s sex life — it was what came next. After making the slug with two backs, and also two penises and two vaginas, both of the mating slugs lost their penises, thread-like organs that are covered with backward facing spines that may serve to remove other slugs sperm from their mates.

Even more surprising than the loss of the penis, though, was the fact that within 24 hours of losing the organs, the slugs had grown new members and were ready and able to mate once more — and once more, they disposed of their new penises afterwards. Slugs in the study were observed to replace their penises up to three times, but it’s not known what the upper limit on regrowing penises might be — or even if there is one.

In their studies, researchers also believe they discovered the clusters of cells that come to replace the detached penis, forming a new one following mating. These are tight spirals of cells at the base of the penis that researchers suspect unravel once the extant penis has detached, making them sort of a spare or ‘penis in waiting,’ though it has yet to be discovered if these cells can also be replenished, or if the third penis is the last one the careless sea slug gets.

Even if it is, that seems kind of fair to us. Frankly, if you’re going to be careless enough to just lose your penis after you use it, it’s not Mother Nature’s job to supply you with an infinite number of replacements.