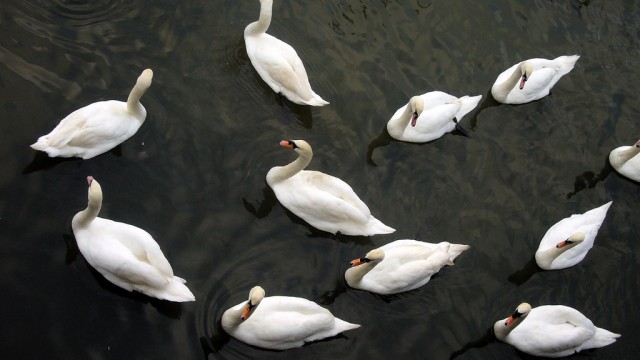 You ever tell somebody a weird piece of trivia you know only to have it become a viral news story the next day? Because yesterday in an editorial meeting I happened to mention that it’s illegal to eat a swan in England, because they’re all technically property of the Queen. Now we’re finding out that somebody tried to do just that.

On Sunday afternoon a group of tourists visiting on Baths Island in Windsor, Berkshire came across the remains of a swan’s body. Park wardens were called in to examine the Royal Bird and found it had been cooked with its feathers still attached, and that that some of the meat had been stripped from its bones.

According to the 1482 Act of Swans (though the swan has been officially marked as the Royal Bird since the 12th century.), the Queen is the owner and caretaker of all swans who live in the United Kingdom, but she only really exercises that ownership on those living in the Thames River. There are some exceptions, of course — Vintners’ and Dyers’ Companies own some swans that they use for swan upping, which is this weirdo census-taking tradition that I don’t even want to get into, and fellows of St. John’s College at Cambridge are allowed to eat unmarked mute swans. We imagine that this nefarious swan-eater was not such a fellow, or he wouldn’t have left the body just sitting there in the middle of a picnic area.

If this swan in particular is found to be one of the Queen’s official swans, the barbecuer could be prosecuted for defacing Crown property, Royal Swan Marker David Berber told the press. That’s in addition to the possible six months jail sentence and £5,000 fine that person is currently facing, because wild swans are also protected under the Wildlife and Countryside Act of 1981.

And now we come back to the real reason that this story is so interesting to me — I was literally just talking about how it’s illegal to eat swans, like, yesterday. Everybody else in that meeting can vouch for it. What if I just discovered my mutant superpower? What if I have the ability to make people break really weird laws just by bringing up those laws in casual conversation?

On a related note, did you know that in Woburn, Massachusetts, it is illegal to stand while holding a drink? Or that it’s illegal to die in Sarpourenx, France without owning a plot in the local cemetery? Just letting you know these things. No reason why.