Batwoman #17 came out yesterday, and in some of its last pages had a… thing… that happened. It’s a spoiler, sure, but it’s not a plot spoiler, it’s just a surprise. And before you get worried, it was a cool thing, an exciting thing, a bit of a cliffhanger thing, and I’m just puzzled as to why DC didn’t make a bigger deal out of it beforehand. It’s the kind of thing they could probably use right about now.

Okay, I’ll stop beating around the bush and put a jump cut here so that I can actually say what happened. Batwoman #17 spoilers from here on out.

Here’s one of the last pages of Batwoman #17, and lets all get sad that it’s the last issue that J.H. Williams III will be drawing for a while (and then excited that he’s starting to work on Sandman): 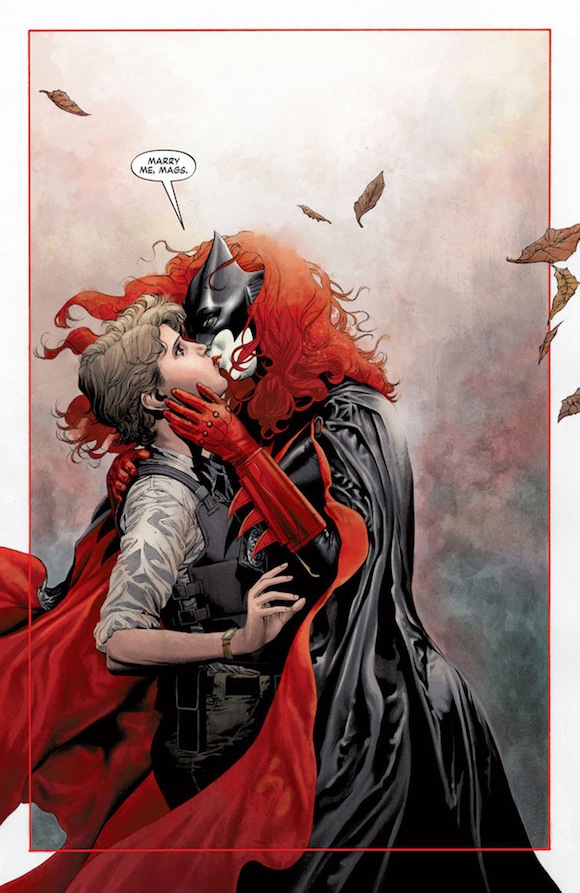 So yeah, lesbian superhero proposal! Kate Kane revealing her secret identity to her New 52 girlfriend, solving the case that’s been tormenting Maggie for months, and proposing to her all in about as many panels! Those crazy caped kids.

But it all does leave me wondering why Kate Kane proposing marriage to her girlfriend hasn’t been front page news at DC Comics this week. After all, we live in an age when comic companies show absolutely no hesitance to spoil major plot events like deaths and marriages the day before the book is released to an outlet like USA Today.

Certainly there’s a definite possibility that wedding bells won’t be ringing any time soon. Even aside from the fact that the (sometimes awfully tired) genre conventions of superhero stories mean that significant others often don’t fare very well, we didn’t get to see Maggie’s response to Kate’s question this issue. Maggie confessed to Kate not too many issues ago that she has a very hard time forgiving people who lie to her, so it would be well within her established character to need some serious thinking time or at worst to break up with Kate after finding out that she’s been hiding the fact that she and Batwoman are the same person from her.

But we’ve seen DC make a big deal out of a gay relationship that was doomed in its second issue before with Alan Scott, the gay Green Lantern of Earth 2. While they didn’t quite manage to get him on The View, they seemed very proud of making one of the New 52’s six Green Lanterns of Earth (the one in the alternate universe) a gay man in a committed relationship. In the second issue of Earth 2, however, Alan Scott’s boyfriend was killed mere moments before the arrival of his Green Lantern ring, leaving him single and traumatized.

It would even have been nice for DC to use this Batwoman issue to say something like: “Hey we know we hired Orson Scott Card to write a Superman story, but we’re committed to the characters that are actually improving the diversity of our lineup. Exhibit A: Batwoman #17.” It wouldn’t absolve them from the questionable decision, certainly, but it would be better than their only other response so far, a single sentence of boiler plate about artists personal views not representing the company’s. I’ve seen some folks point out that hitching up Kate Kane and Maggie Sawyer might even have happened because of the backlash against Card, but I remain skeptical of that. Batwoman #17 was solicited months ago, and Card’s involvement in a Superman anthology was only announced last week.

DC has been hands off about Batwoman for pretty much the title’s entire existence. It’s one of the few books in the New 52 that was actually proposed and greenlit before the idea of the reboot was, and then delayed to coincide. As such, it’s to be expected that its early issues didn’t have much to do with the rest of the New 52’s setting, even including some glimpses of characters who may or may not exist anymore. But the title has continued to remain separate since. Batwoman didn’t get a Court of the Owls or Death of the Family tie-in issue, unlike “Batman” titles as tertiary as Suicide Squad. DC even rearranges the ads for each issue of Batwoman to allow for J.H. William’s fondness for double page spreads. Williams is known as a perfectionist, and between writing and drawing Batwoman I can understand why, for example, DC might have known about a Kate/Maggie proposal and decided that he wouldn’t have time to include them in the publisher’s special Valentine’s issue featuring couples from around the DCU like Catwoman/Batman, Aquaman/Mera, Apollo/Midnighter (another gay couple), and Superman/Wonder Woman.

DC could go a long way with promoting Batwoman’s proposal and, if it happens, marriage. So if they haven’t yet, let me: Maggie Sawyer, who transferred to the Gotham police force after being a prominent recurring character in Superman stories, was one of the first out gay characters in the DC universe in the late eighties. Batwoman is the first gay member of the Bat-family and the first lesbian superhero to headline her own title in history. Their relationship embodies the fact that while DC might not have a perfect track record on these matters, minority characters have been an important part of its universe for decades, and they will be for decades to come.