Bats Eaten By Spiders Around The World | The Mary Sue 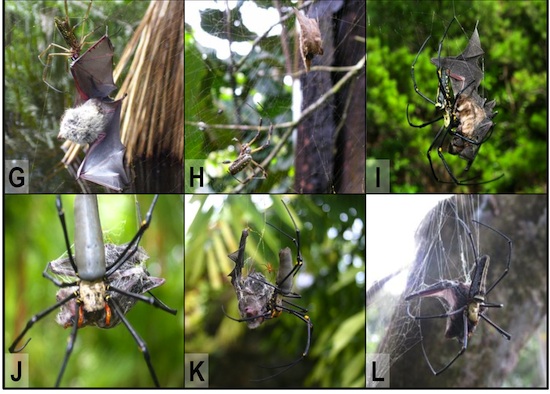 Here’s some nightmare fuel you could have gone the rest of your life without knowing: every continent except Antarctica hosts spiders so large, they can trap bats in their webs. That’s according to a study released earlier this month in the open-access journal PLOS ONE that records in often gruesome detail 50 incidents of spiders ensnaring bats. In related news, who is moving to Antarctica with me right the hell now?

While all six populated continents host these giant examples of why spiders fill us with dread, it’s worth noting that species that grow to this size are much more common in tropical climates. This may be the single best argument we’ve ever heard for putting on a damn sweater and living someplace where it snows a lot.

The majority of bats caught in webs were small, insect eating varieties, who had the tables turned on them in just about the worst fashion it’s possible to imagine. While some of the animals notably died of starvation or suffocation, suggesting they were trapped in the webs accidentally, many of the bats seen by the study were devoured by their captors, as evidenced in the above picture which will surely plague your dreamscape until the end of time. While the data isn’t much, the results are enough to suggest that “spider predation on flying vertebrates is more widespread than previously assumed,” say the authors.

Even worse news? The predation isn’t limited to web spiders — a particularly large specimen of one hunting spider species was seen making an attempt to kill and eat a baby bat, which is horrible, because seriously, look how cute baby bats are!