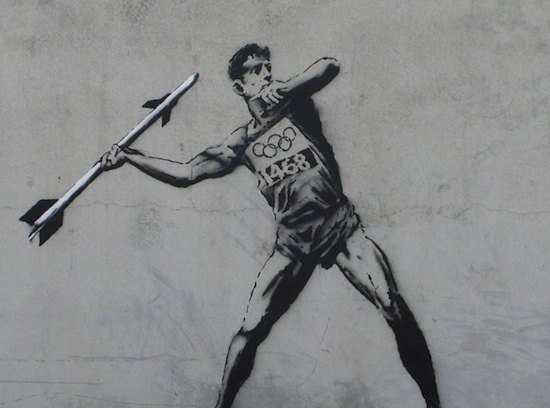 By this point, you are no doubt aware that the U.K. Ministry of Defence is installing surface-to-air missiles around London as a deterrent against would-be airplane hijackers during the Olympics. As you can imagine, some people are unhappy about the idea of having heavy weapons next door. Popular street artist Banksy doesn’t seem too happy about it either.

Some are interpreting the image above as reference to Australian swimmer Ian “Thorpedo” Thorpe. However, that looks like a missile to me, and the controversy about the militarization of the city in advance of the Olympics seems more like the famed artist’s cup of tea.

Another piece, showing a pole vaulter going over a collapsed barbed wire fence and into a disused mattress, was also posted to Banksy’s website.

However, if you’re keen to see these pieces in person, you’d better act fast. London police have reportedly vowed to destroy any and all graffiti they come across, and these two works may not be long for this world.

(Banksy via The Fox is Black)