In Preparation for Olympics, U.K. Rolls Out Missiles to Take Out Hijacked Passenger Planes 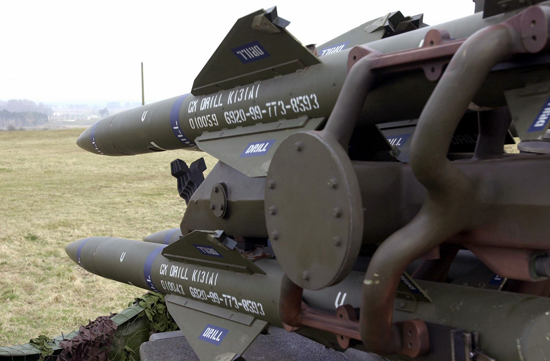 With their Ronald Reagan School of Missile Defense diplomas clutched tightly in hand, U.K. officials have revealed their newest addition to the line of gadgets designed to seek and destroy in defense of the London 2012 Olympics. The Rapier surface-to-air missile system is an impressive piece of technology, designed to engage up to two targets at once. In this case, unfortunately, said targets would likely be hijacked Boeing 747s and other such aircraft full of innocent passengers.

That’s in an absolute nightmare scenario, of course, but it doesn’t make it any less unsettling. And it’s not like this should come as that much of a surprise after the responses we saw in the face of the 9/11 attacks.

The Rapier is intended to bring down large fixed-wing aircraft and other potential airborne hazards like drones and helicopters. It also comes with advanced radar systems with a range of up to 5 miles. Though the Rapier itself has been in military use since 1971, this is a lot of ordinance being paraded in order to act as a deterrent to any terrorist plots during the Olympics.

What was previously a “may be deployed” when Mediaite first reported on it seems to have become a “will definitely be deployed” as of now. What’s still up in the air is whether they’ll be deployed on apartment rooftops, to the chagrin of the locals.

The most distressing part of the entire scheme is that even if the call was made to use the missile systems, it’s not as if the targets would go up in a puff of smoke and disappear. Speaking to the Associated Press, retired Dutch Navy captain and director of the Wiser defense consulting firm Jan Wind had this to say about the Rapier system:

“When you launch a Rapier missile and shoot down an aircraft, it’s not like the whole thing vanishes. It’s 100 tons of metal, scraps, and other stuff that is coming down […] If a Rapier is used, the damage could be just about the same as the intentions of the terrorist — only on another spot. The goal of the terrorists will be met in a certain sense[.]”

Because as everyone knows, more missiles equals more safer. If we can get enough missiles, they won’t be able to missile our missiles before we missile their missiles first.

(AP via WCFCourier, image via Wikimedia)