Bad Gamer Part 17: What Happens If You Play Through Dragon Age: Inquisition Like a Total Jerk? 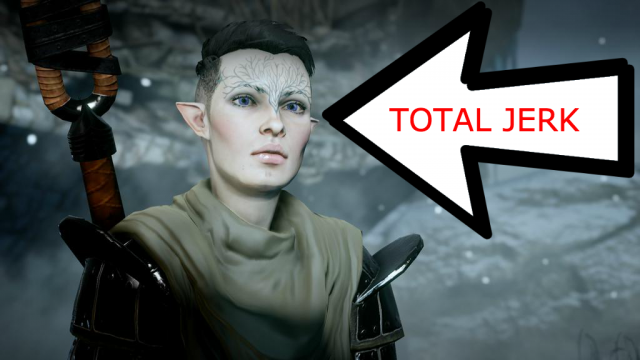 Catch up on the previous Bad Gamer installments if you missed them!

We venture out again, but this time to the Approach. It’s the same old story at first: rifts to close, bad guys to slaughter, but then we come across a temple called the Still Ruins. It’s protected by a magical barrier so of course I want to see what’s behind it. Everyone groans but I tell them to shut up. I’m in charge of whatever we do around here.

I find a note just on the other side of the barrier from someone who implores the Venatori stationed there to take this place for the Elder One, for Corypheus, and not to fail him. Well, well, well, what’s Corypheus after here? 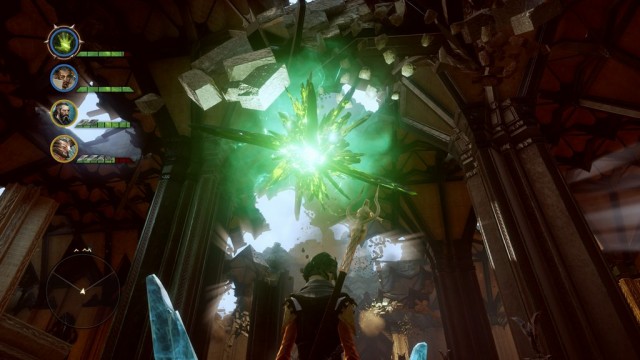 The moment we step over the threshold, I know there’s something very wrong here. Demons are dotted throughout the ruins, frozen where they stand, a rift in the very middle of the great hall both there and not there. It’s as if time has stopped around us, but I know that can’t be as there are living, breathing and moving Venatori in here for us to dispatch. And found among the Venatori corpses moments later is a note explaining they are there searching for a powerful relic—a relic I ought to have, no?

We venture through the ruins and discover that the relic is in a chamber at the back, a chamber that can only be unlocked with the use of five keystones. I collect these keystones easily enough. Were the Venatori too busy polishing their armour to bother looking around properly? This job was a piece of piss, but I am still glad that they left whatever relic is here for me to find instead. We open up the chamber with the keystones and step inside to claim the prize.

It’s a bloody staff. Quite fitting, all things considered, but I was hoping for something better. The others tell me to be careful, but I grab it gleefully with both hands. Which is exactly the moment the ruins begin to collapse. Obviously the staff was keeping the spell in place, for the rift has reopened and there are fucking demons everywhere. The others are full on bitching about me pulling the staff free, especially as they warned me to be careful, but who closes the rift without breaking a sweat? Oh yes, that would be me.

After that, it’s time to deal with the Darkspawn in the area. Don’t ask me how the hell I got roped into this one, but here we are again. I end up in the ruins of Coracavus, an ancient Tevinter prison, where some daft idiot has obviously driven a hole into the Deep Roads and unearthed the Darkspawn. We close up the tunnel and continue on through the prison. At one point the ground shakes. Violently. I shrug and press on. What can’t we handle now? We find a note on a body regarding a man called Servis who fled once the Darkspawn were unleashed and was evidently one of Corypheus’ lackeys. Sounds like Servis and I need a little chat.

We find the source of that rumbling noise in the south entrance. It’s a giant. I’d be terrified if we’d not faced the buggers before, but we have and it’s not a huge deal. Blackwall cries “nothing to worry about” as if he wasn’t concerned there at all, but I can see his hands still shaking. Pull the other one, Blackwall. I can’t help smirking to myself, but resist calling him a hypocrite and move us on. The prison opens out onto the other side of the hills, which will come in handy for my people trying to resupply various outlying Inquisition camps.

Servis, the wily man working for Corypheus, is hiding out in Echoback Fort. We beat him up a little and kill his men. We have a choice: leave Servis to die out there or take him in alive. I don’t want to waste precious resources on him but it might be nice to know what he knows of Corypheus’ plans. As much as I’m aching to leave the coward in the boiling sun to fester and die from his wounds, Leliana will no doubt want to question him. I can always execute him after. Nothing like a good execution for the masses to watch. 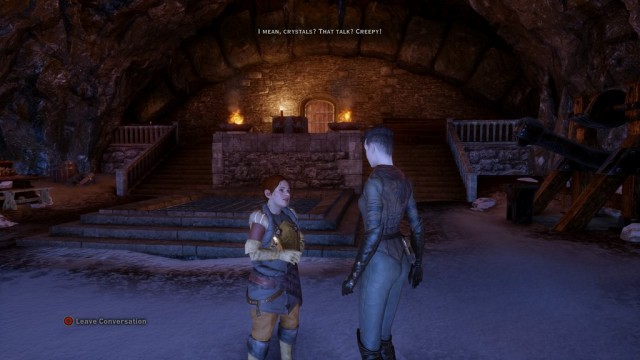 When I return, Josie ushers me into Undercroft—our armoury and weaponry workshop—to meet Dagna, our new Arcanist. She looks so sweet, and it’s not just because she’s a dwarf (what can I say, I’m an arsehole), it’s also because she’s got rosy cheeks and a cute little hair bun and, wait—she’s our Arcanist? She’s exactly the opposite of what I expected, and she’s also very strange, which I suppose I did expect. She admires the beauty of the rifts for one. They’re annoying and deadly, not beautiful. I tell Dagna it’s time to get to work. She needs to earn her way into the Inquisition’s service. 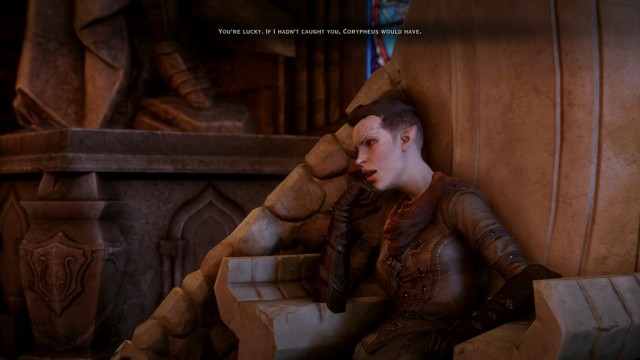 Servis awaits my judgement. Much to my surprise, he actually smuggled artifacts out of the Western Approach without Corypheus knowing about it. A pretty brazen and idiotic idea on his part, and I’m surprised he’s still standing. Servis claims he can help. He tells me he cares little for Corypheus and can do work for me and mine, even using some of the Tevinter contacts who owe him debts. It’s certainly very tempting, though I don’t know how much of what he’s saying is just because he doesn’t want to die. I decide to give him a bit of a test ride. He’s to become an informant with a probationary period. If we find he can’t be trusted during this time, we’ll send him back to Corypheus where a gruelling painful death will be waiting for him. 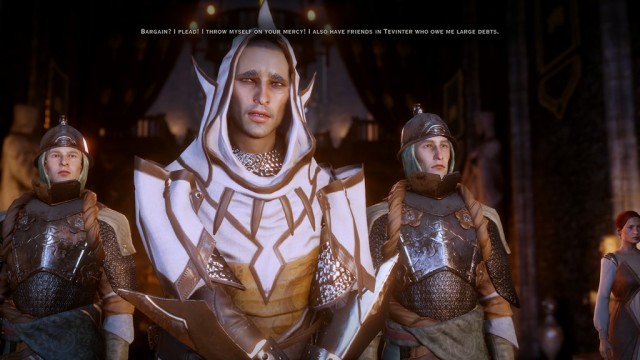 Back in the Western Approach, Frederic, the Dragonologist, has asked for our help in luring the dragon. At first I was reluctant as we do have other things we’re meant to be accomplishing, but then Bull gives me those oh so excited eyes, and who am I to say no to a Qunari warrior who wants to slay a dragon? I’m not sure if Frederic knows we’ll be slaying this particular dragon, but I don’t really care much. 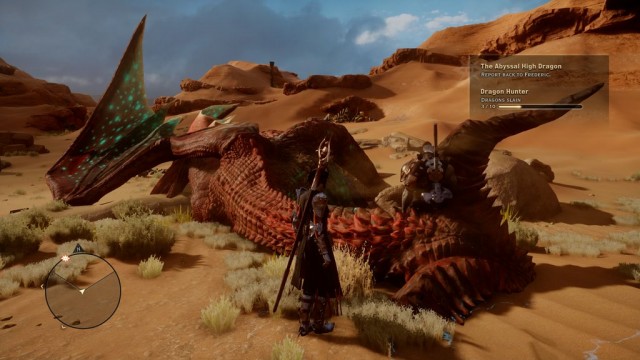 The Abyssal High Dragon is baited and it actually turns up, circling us for a few moments before landing with an earth quaking crash of limbs. Bull tells me I’m the best and runs toward it with his axe held high. Needless to say, Abyssal High Dragon: 0, Iron Bull: 1. 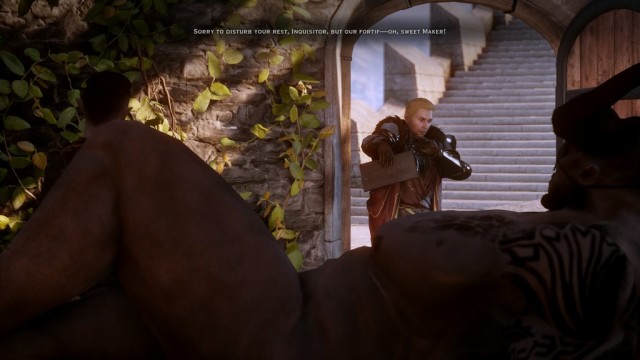 We return to Skyhold to turn in for the night, but Bull has a few other ideas. He hauls me upstairs to a bedroom above the tavern where we are interrupted not only by Cullen, who looks like he might be sick on seeing a naked Bull, but also Josie who can’t stop staring, and Cassandra who calls it a “momentary diversion”. 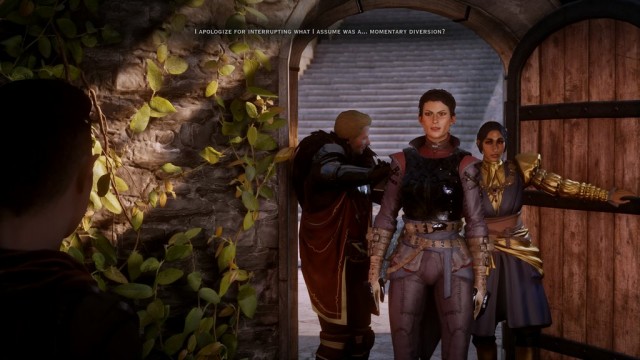 You know what, Cassandra, this is a diversion, but now you’ve pissed me off again. She’s probably just achingly jealous. I tell them to mind their own business. How dare they burst in here without either knocking on the door or having the decency to step away? I ask if there’s any problem with my arrangement with Bull and glare them off one by one until I’m finally alone again with him. 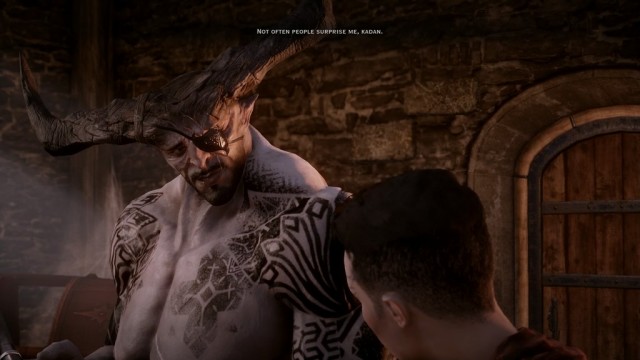 Diversion or no, at least he has respect for his superiors. I hand him a token of my appreciation, a little memento to remember our time together. It’s a dragon’s tooth split in two for us to share, and he seems a little overwhelmed and surprised. I hadn’t anticipated him putting this much of his heart into this arrangement, and I silently pray I won’t have a crying Qunari in my lap in a few moments. Thankfully, he just takes me back to bed, where I try to forget that we’re off to the Arbor Wilds in the morning to try and stop Corypheus’ next plans.

Emma Fissenden is a writer of all trades. When she’s not pushing through her next rewrite, she’s playing too many games and working as the Editor in Chief of @noblegasqrtly. You can find her on Twitter @efissenden, or check out her other series for TMS, Game Changer.