Fox didn't consult us about the cast of Axe Cop, but if they did this is probably what we would have come up with. 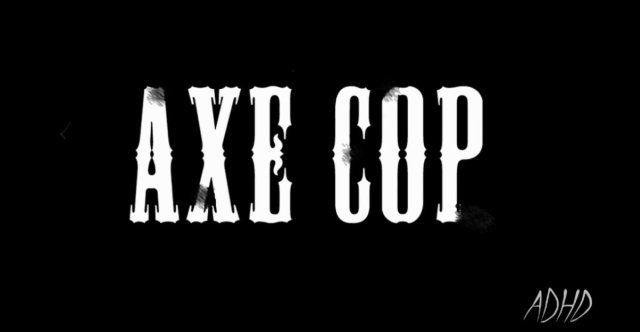 Did you know that Nick Offerman wasn’t officially Axe Cop until yesterday? I mean — we’ve heard him be Axe Cop, but no one could officially say it until yesterday because of Offerman’s deal with NBC and Axe Cop is a Fox project. Now, though, not only is that thing we already knew confirmed to be a thing that is, there are even more Axe Cop casting details and they’re all amazing.

Axe Cop co-creator Ethan Nicolle posted on the Axe Cop Blog about the casting updates — complete with side-by-side comparisons. First up, and absolutely no surprise to anyone — Nick Offerman is Axe Cop.

Due to the conflict with Offerman’s NBC deal he was prepared to do the part uncredited with the credits saying Axe Cop was voiced by “Himself.” That wouldn’t be far from the truth. All you have to do is watch any of the clips with Offerman to believe that he really is Axe Cop.

Offerman as Axe Cop is tremendous, but it’s nothing we didn’t know already. Let’s look at the rest of the cast, and again — it’s amazing.

A change to the Axe Cop show from the comic is that although Flute Cop still becomes Dinosaur Soldier when there’s blood spilled on him, he goes back to being Flute Cop. If that means more time for Marino and Offerman to do fun partner stuff together then I’m all for it.

Gray Diamond’s casting is so perfect it actually prompted the creators to add the character to additional episodes. Who could inspire such confidence? Answer: Rob freaking Huebel.

Maybe you’re asking, “Is Dr. Doo Doo going to be in the Axe Cop show?” He sure is, and he’s being voiced by Peter Serafinowicz.

Serafinowicz is also voicing a lot of minor characters on the show. If you’re watching Axe Cop and there’s a character with an accent you can probably bet it’s Serafinowicz.

So far all this casting news has me excited because I’m a big comedy fan, but what about someone who’s more into movies like Kill Bill and Reservoir Dogs? It’s cool. They got Michael Madsen to play Baby Man. It apparently took a lot of convincing to get Madsen to believe the show was real and that he wasn’t on an episode of Punk’d.

What of Axe Cop’s clone Book Cop? Jonathan Banks is voicing him, and according to Nicolle you have to see his episode to really appreciate just what Banks brings to the character. I don’t know. I’m pretty appreciative about it right now.

Even better news? Banks isn’t the only Breaking Bad alum to be cast on Axe Cop. Giancarlo Esposito is Army Chihuahua!

That’s it for the handy side-by-side comparisons from the Axe Cop Blog, but there’s even more casting news! Kartheiser isn’t the only Mad Men man in Axe Cop. We’re also getting Jarred Harris as the King of England. As for the ladies of Axe Cop, Offerman will be joined by his wife Megan Mullally who will provide most of the female voices on the show, and rapper Tyler the Creator is voicing Liborg.

This show is going to be so good. I can’t wait. Please let this show run forever.