Ava DuVernay Helps Bring Us Together | The Mary Sue

Ava DuVernay Helps Bring Us Together, Like The Awesome Queen She Is 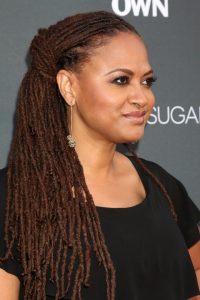 In these dark times, we find ourselves looking for heroes to help guide us through the uphill battle that is slowly dismantling toxic masculinity and the influence those men have over our world. Thankfully, the universe gave us Ava DuVernay.

During her speech, DuVernay spoke into the mostly Hollywood audience, not about Harvey Weinstein and his ilk, but those men she felt have actually proven themselves as those who create safe spaces for women.

“I won’t focus on men … who develop and dwell in the dark, dangerous places that make the world unsafe for so many women,” said DuVernay. “I will focus on the men I’ve encountered who chose not to use their privilege to diminish but rather to uplift. Tonight, I’m gonna tell a few stories about the good guys — in a spirit of salute, in a spirit of sanctuary, in a spirit of soothing an open wound that has been festering past the point of attention and care.”

J.J. Abrams, one of the “good guys” also had a praises to heap upon DuVernay (rightfully so), “We are riding a very unpredictable and tumultuous and, in many cases, painful, wave and being here tonight to honor someone like Ava who is doing such incredible work and is such a beacon of activism and optimism is a wonderful antidote to everything else,” he explained.

With the stink of the Weinstein accusations still in the air it was clear that everyone wanted to not just denounce him, but also join with DuVernay in uplifting those who get it right.

Emmy Rossum, Shameless star and all around talented person, spoke on the wounds that are still be healed. “We are all still processing. Some new information for all of us; some of us seem to have known. Sarah Polley just wrote something for The New York Times that we read five minutes before we left the house that we feel very stirred by. We definitely want to condemn actions that don’t reflect how we want the culture of our industry and our society to be, and we also want to look within ourselves to see what we can do better.”

Mr. Robot creator, Sam Esmail, added “The stuff that goes on is really despicable and has no place in any work environment, let alone in our industry…There is something about our industry where women especially are asked to be vulnerable and sexualized. That has to be treated with more sensitivity, not less.”

As we attempt to move forward none of us can be deluded that it will change overnight, but what we do have now is receipts. Everyone who has spoken up, denounced all of Weinstein’s actions and said we must do better: it is now up to you to live up to you. We are watching. Those “good guys” must continue to step up to plate and most importantly call out those who have fallen short. The only way to remove this albatross from Hollywood and all other work environments to make sure everyone is held accountable.