What Happens When You Auto-Tune a Vuvuzela? Geekosystem Investigates 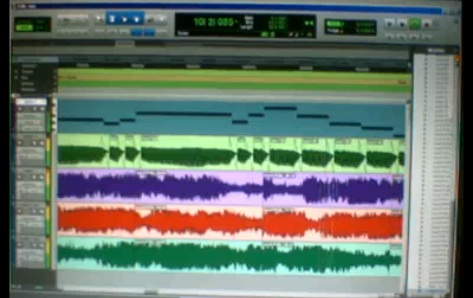 A vuvuzela is a long, plastic horn that soccer fans blow into to produce a loud, irritating buzzing noise; they have inexplicably become the Internet’s central obsession in the opening week of the 2010 World Cup. Auto-Tune is a pioneering pitch correction program by Antares Audio Technology, which you most likely associate with the robotic vocal stylings of T-Pain and other pop music icons. But you knew all that. What happens when you Auto-Tune a vuvuzela? And while we’re at it, what happens when you coordinate several Auto-Tuned vuvuzela samples to play a few measures from Europe’s anthemic 1986 hit, “The Final Countdown”? In the name of science, Geekosystem investigates:

Here are the two component tracks, vuvuzela-1.mp3 and vuvuzela-2.mp3, the nature of which are more fully described below:

And here’s video of the Pro Tools screen of vuvuzela-1.mp3, on the off chance that will be useful:

First, the parameters: Everything in these files was generated based solely on two vuvuzela samples. #1 is the audio from the “Wanna hear the most annoying sound in the world?” videos [This was the vuvuzela audio that automatically played when you entered 4chan’s /b/ forum this past weekend. –Ed.], and #2 is a 4-second recording at http://en.wikipedia.org/wiki/File:Vuvuzela_single_note.ogg

As far as the recording of multiple vuvuzelas, Auto-Tune fails to detect a pitch and can’t apply any correction. But based on a human’s analysis, the instruments in the recording are playing “more or less” a B♭. Although Auto-Tune can’t *detect* the pitch, there’s nothing stopping us from applying a simple pitch shifter plugin, and manually configuring it to shift the sample a fixed number of pitches away from B♭. So for all instances of sample #1, that’s what I did. It doesn’t really sound very musical, although you can sort of almost hear what notes it’s trying to make.

Auto-Tune handles the single note version (sample #2) beautifully. In fact, it sounds less like a vuvuzela and more like something that came out of a MIDI file on my old Sound Blaster 16. Because of this, I chose sample #2 for the melodies.

The song I chose to butcher was Europe’s anthemic 1986 hit, “The Final Countdown.” Because really, why not? (Also, it’s one of the few popular melodies I knew how to play off the top of my head.) The melody is an unmodified copy of sample #2, edited so the onset of the sample lines up with the beginning of each note. Auto-Tune was set to target notes based on a MIDI track that I had recorded, with a very fast (some would say T-Pain-esque) retune speed. The result sounds like a synth horn with some missing lower harmonics — but it’s a whole lot better than the annoying droning sound we started with.

For the harmony, I set up three tracks which each played one note of the underlying chord triads. Because AutoTune couldn’t track the pitch in sample #1, I manually pitch-shifted each track at each chord change to play an approximation of the correct note. It still sounded like a pile of angry bees, but as if said pile of angry bees was attempting to harmonize. This is vuvuzela-1.mp3.

On a whim, I decided to replace all the instances of sample #1 with sample #2, properly Auto-Tuned. The result was a shrill, uninteresting mix that detracted from the melody and isn’t worth reproducing here. Before I dismissed the idea, I pitch-shifted the three chord tracks down an octave — which made the result fairly listenable! This is vuvuzela-2.mp3.

When you pitch-shift a vuvuzela down an octave then Auto-Tune it, it sounds kind of like the beginnings of a rock organ (but without the rotating leslie speaker effect.) Every time I play the vuvuzela-2 file, I can’t believe it was built entirely from one Wikipedia sample. It just doesn’t sound authentic — like something a Yamaha keyboard churned out. But it’s the real deal, I can attest to that.

I combined the two harmony techniques, using both samples #1 and #2, into the finished product. It sounds more authentic but slightly less musical. Still interesting.

So, to answer the question that nobody asked… Can you Auto-Tune a vuvuzela? Yes, you can AutoTune exactly *one* vuvuzela and it will sound like a MIDI instrument. Any more than that, and AutoTune will have more and more difficulty trying to determine the pitch.