Ask the Mary Sues: What Are Your All-Time Favorite Fan Theories From Film or TV?

Time to roll out your red strings, everyone. 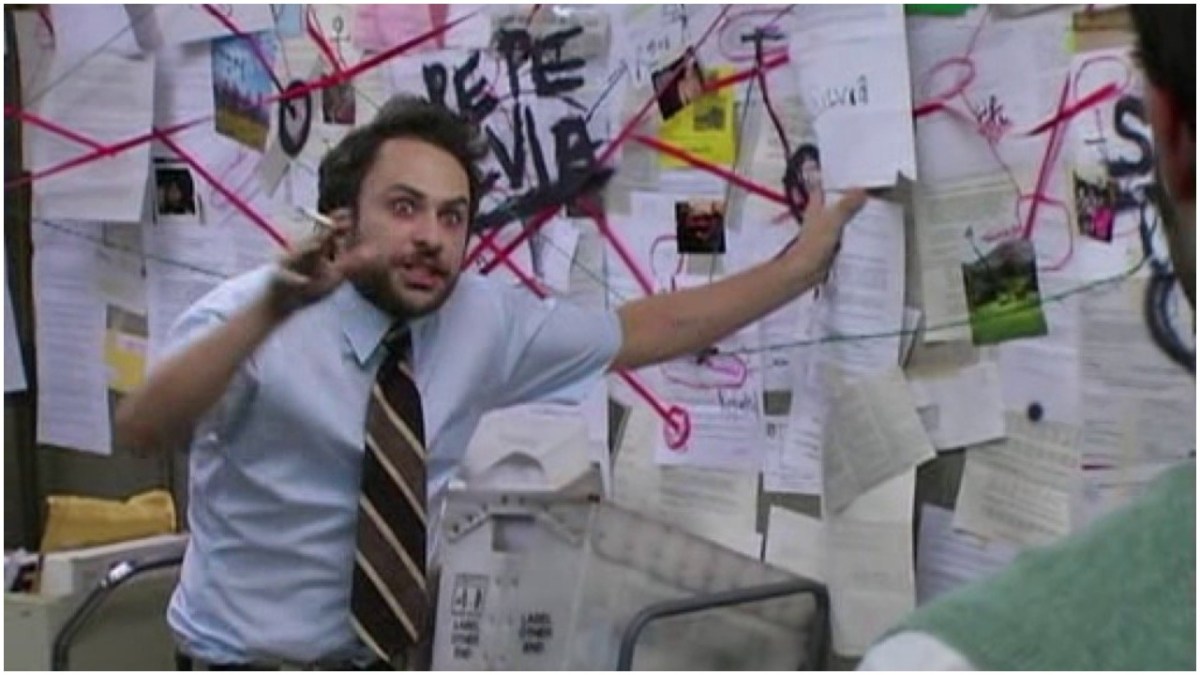 Everybody loves a good fan theory. I like to imagine that even in the olden timey days, when bards were singing lyric poems about mythical heroes, two ancient nerds were whispering to one another about side plots and symbolism. And now, in our extremely online world where fans can pour over Reddit pages about background props, lines of dialogue, and other in-show minutia, fan theory is more popular than ever.

the crux of their conversation was that one of the women believed the island to have been purgatory, and the other was slowly coming to agree…

the women nodded and smiled politely, and then turned back to their conversation, which started up again with the one woman saying "so let me explain why it was purgatory and they were dead all along…"

One needs only to type WandaVision into Google and be inundated with a deconstruction of every aspect of the Disney+ series. We’ve even dabbled in a few WandaVision theories ourselves, much to the annoyance of our friends and partners. Now, with the finale of WandaVision just hours away, we thought we’d look back at some of our favorite pop culture fan theories.

Way back in March 2018, before the release of Avengers: Infinity War, fans floated the idea that Tony Stark himself was the mysterious Soul Stone. This wild theory came from a Marvel promotion that superimposed images of Avengers over the colorful Infinity Stones. While most of the heroes were matched up with a Stone that had played a significant role in their stories, Tony Stark was the one chosen for the orange Soul Stone. Since the stone was at that time yet unrevealed in MCU canon, fans decided that maybe the Stone was actually Iron Man, and this promotion was a hint! Perhaps Tony’s inventor father Howard Stark used the Stone to invent … Tony. Or maybe Iron Man’s mighty suit was really powered by the power of Soul all this time. Alas, as we discovered in Endgame, the Soul Stone was actually on the planet Vormir, and it really sucks trying to get your hands on it.

you had to be there pic.twitter.com/X6zUw8rOqR

This fan theory feels like a fever dream. You truly had to be there. Fandoms came together to put multiple Disney/Dreamworks properties together in one shared universe. I’d completely forgotten about this until seeing this tweet, and while I couldn’t tell you how it all made sense or who was shipped together, I KNOW this is a thing that happened, and for a while it was all over Tumblr.

For a fairly straightforward series with no fantasy or magic elements, Mad Men inspired a host of off-the-wall conspiracy theories. First there was the question of Don Draper/Dick Whitman’s identity, with many believing the film would end on a reveal that Don was infamous hijacker D.B. Cooper. Then, thanks to a costuming choice, the internet lit up with theories that Megan Draper would meet a grisly end in Hollywood a la Sharon Tate, who was horrifically murdered by the Manson family. Finally, the appearance of Man of Mystery Bob Benson had everyone wondering whether he was Don’s long lost relative, a grifter, a serial killer, or even the devil. In the end, Bob Benson turned out to shock us all with his true identity: a man with a crush on the odious Pete Campbell.

There were so many wild fan theories throughout the run of Supernatural, most about how and when Dean and Castiel would finally confess their love. I really like the one where they were supposed to make out in a laundromat and another one where, despite all the season-long declarations that Dean had a deep connection to Amara/The Darkness, it was going to somehow end up being that his pining all along was for Cas. Honestly, all of this was better than some of what we got on the show.

This Ant-Man/Thanos theory is the best fan theory ever, I will not be taking questions at this time.

One of my favorite theories on the internet is that Anna and Elsa’s parents from Frozen are also Tarzan’s mom and dad who died in the boat crash on their journey. Why? Because that means that Anna would probably learn about Tarzan and think it was the coolest thing ever and talk a mile a minute about her fun brother who lived in the jungle. But also if Disney was all connected, that’d be fun and would explain why everyone thinks that Boo from Monsters Inc. is also a time traveler.

I’m going to have to go with the island = purgatory theories from way back in the days of Lost. I was never a particularly big fan of the theory itself, but after the final season turned out, in part, to be a similar concept, it has always amused me. At the time, it felt like the writers were doing whatever they could to try to give fans what they wanted, like they’d just read message boards and said, “Well that’s not what’s going on now, but sure, let’s find a way to work that in. Why not?”

What are your favorite fan theories? Let us know in the comments!