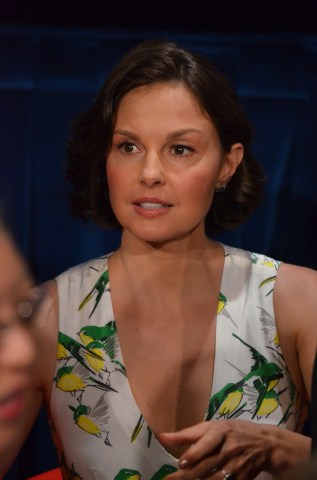 Ashley Judd, co-star of Divergent and Insurgent/woman who dared to have an opinion—on sports or otherwise—isn’t standing for being harassed by Twitter trolls. She’s pressing charges, no matter how many other Twitter trolls try to explain that threats are alright as long as they happen on the Internet.

The harassment began when Judd Tweeted, “I think Arkansas is playing dirty,” on Sunday from her seat at the SEC Championship basketball game, which is a highly contentious sporting event from what I understand. So contentious, in fact, that Judd’s tweet drew gendered insults and threats of sexual assault.

When when I express a stout opinion during #MarchMadness I am called a whore, c—, threatened with sexual violence. Not okay.

Just for example, in case you have somehow managed to avoid this treatment as a woman on the Internet or you’re not a woman and are also completely oblivious to what goes on around you:

I am sorry to retweet but this is a typical example. “@Leeroy_MAX: .@AshleyJudd Go suck on Cal’s two inch dick ye Bitch whore.”

Judd plans to press charges, because this is the kind of thing that should not be tolerated whether the threats and harassment are in person or online. No one should talk to another human being like this—ever. And so, of course, the Internet responded in its infinite wisdom:

@TomAdelsbach @Haleysmilessss SO. You believe I should be sexually violated, degraded, raped, sodomized. NO MATTER WHAT, NO. — ashley judd (@AshleyJudd) March 17, 2015

She’s right; you can’t compare a tweet about the nature of a play in sports to harassment and threats. This “criticism” even led her to explain herself on MSNBC, saying,

In my impassioned game moment, I said something that, if I were in a more calm state of mind, I might have phrased differently. I might have said, ‘I feel really disappointed with what seems [like an] ultra-aggressive play.’ Instead, I wrote, ‘I think Arkansas is playing dirty.’

But as she said, no amount of phrasing can equate her tweet to the ones she received in response. It’s incredibly disappointing that she was harassed to the point of feeling the need to explain herself when there was nothing wrong with her original comment, and on top of that, it shouldn’t matter. Putting this back on Judd is just victim blaming, plain and simple. And of course, more gender-based hate was thrown her way in reaction to her intent to do something about it:

Hopefully, something more will come of her legal action than usually does in situations like this—not only because she deserves justice, but the whole of the Internet does, too. Judd says she’s been filling out a lot of police reports on the incident and Twitter has taken action against many of the offending accounts, but the real test will be whether or not that results in arrests. We need to change the common wisdom of, “That’s just how the Internet is. Deal with it.”

Example: I am mentally weak for not tolerating sodomy threats. “@AshleyJudd oversensitive liberals like are you that mentally weak?” — ashley judd (@AshleyJudd) March 17, 2015

There shouldn’t be a societal expectation to just put up with this kind of harassment, and hopefully Judd and other prominent people like her can help pave the way for the rest of us to do something about it.

(via THR, image via Genevieve)